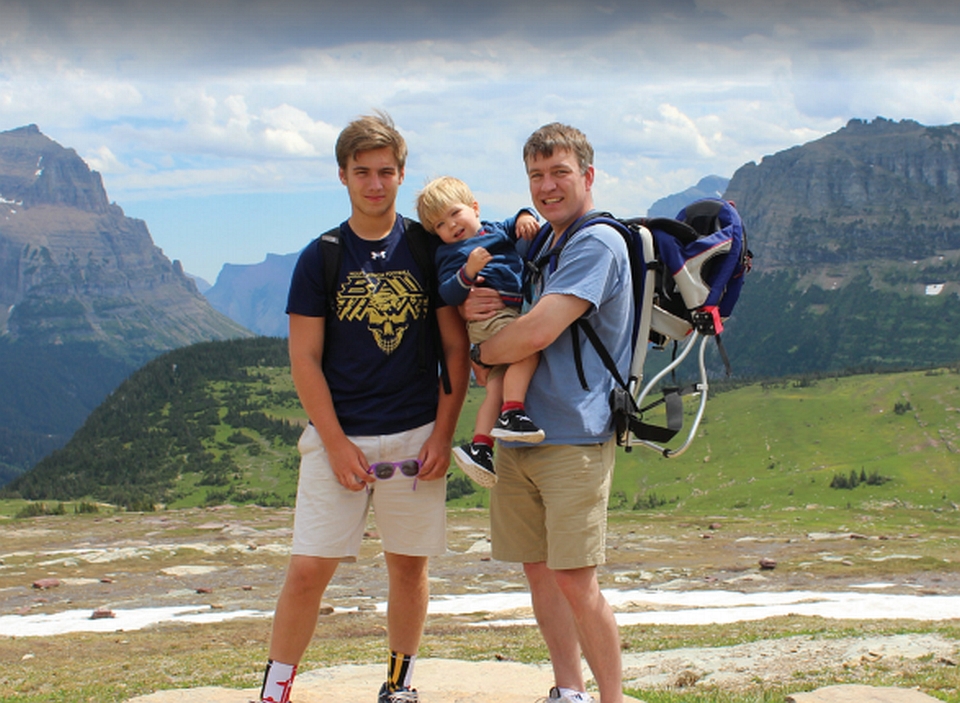 Name: Clay M. Westbrook
Family: My wife of 9 years, Elizabeth, is a 1995 UGA graduate. Our first date was a Georgia football game. My son Griffin is 17 years old, a senior at Mount Vernon Presbyterian School in Sandy Springs and plays left offensive guard, right defensive tackle, and long snapper for the Mustangs. My son David is 2 years old and enjoys waffles, trains, swimming, and tantrums.
Hometown: Athens
Current Town: Sandy Springs
What Years at UGA: 1985 – 1990 undergrad, 1990 — 1993 law school
School/Degree: AB, History, JD
Accolades: Cum laude graduate of UGA Law Kappa Sigma Fraternity “Geek of the Year,” 1987.
Profession: I left Athens in 1993 with one carload of belongings, a Labrador Retriever, and dreams of success and wealth. After the real world swiftly crushed those dreams,
I practiced law for many years and am now a consultant helping business owners solve financial problems via negotiation, litigation, and taking advantage of the other side’s laziness and lack of attention to detail. I wrote a book about my experiences entitled Debt & Circuses: Protecting Business Owners from Their Enemies, Their Allies, and Themselves. “A delicious cocktail of war stories mixed with social psychology, served in a frosty glass of dry humor and questionable metaphors.” I’m working on a second book on negotiation, which I hope to publish by Christmas.

“Back when I was in college, I knew everything. Now I don’t know nothin’.” —Chris Barron. I suppose one life lesson that stuck with me was to not let setbacks along the way cause you to quit or alter the plan or your objectives. When things aren’t going as planned, stick around and see what happens. Don’t bend to pressure (from others or yourself) to change your plan or give up. Things won’t go as planned, and always take too long, but if you reach your goals, the setbacks are forgotten. All is well that ends well, one might say. I also learned to never lend Steve Penley money.


What professor did you most admire (and why)?

Dr. Phinizy Spalding was a legend in the UGA History Department. He had a passion for his subjects and was very demanding. A hip cat on the Athens scene, he once invited a few students to a cocktail party at his house on Cobb Street, and REM showed up. Turns out we were invited because he needed bartenders. I enjoyed Dr. Perry Sentell’s classes at UGA Law School, probably because I had Professor Eaton for Torts. He made the dry subjects of Legislation and Municipal Government entertaining and interesting. He also loved Georgia football and canceled class Georgia-Florida weekend. “If I live, and I think I will, I’ll be going back to Jacksonville.”


What do you consider your greatest achievement?

It sounds cliche’, but I am most proud of my two boys. Both of them like sweet tea, Varsity hotdogs, Georgia football, and beating Tech. However, with Griffin 17 and David 2 1/2, neither of them listens to me and only come around when hungry. I also fixed a gin and tonic for Mike Mills and opened a Budweiser for Pete Buck.*


Which historical figure do you most identify with?

That is a difficult question because while their story has been told, our story is incomplete. With that in mind, let’s go with Jean-Jacques Rousseau, who at age 50 wrote The Social Contract, which in many ways inspired the French and American Revolutions. And also Ray Kroc, who bought the first McDonald’s restaurant at age 53. Sometimes, though,
I feel like Jasper Sanks after the 1999 Tech game.


Who are your heroes in real life?

I can’t imagine a Bulldog not having Herschel Walker as a hero. He is a remarkable man to have such humility and character as one of the great athletes in history. He never let fame and fortune go to his head and crash and burn like countless famous athletes. Mama raised him right. My other heroes are our former clients, the business owners we helped, for their courage to fight when everyone else told them to give up.


Quotes to live by:

“To secure ourselves against defeat lies in our own hands, but the opportunity of defeating the enemy is provided by the enemy himself.” – Sun Tzu


What is your idea of perfect happiness?


What is your most marked characteristic?

Ha! My loving and adoring fraternity brothers saw fit to name an intramural sports team after me: The Melon Heads.


What do you most value in your friends?

I don’t have any close friends I see regularly. When we do get together, even if it has been years, we pick right up where we left off, as if years ago was yesterday.


If you could change one thing about yourself, what would it be?

I wish I could be more patient and not get frustrated when dealing with those annoying little things that crop up every day that waste time, e.g., waiting in line, traffic, Auburn people, etc.


Who are your favorite writers (and why)?

Steven Pressfield — if you aspire to be a writer, read The War of Art. If, after reading, you still aspire to be a writer, it’s in you. Lewis Grizzard — “I said the blessing before we had lunch. I thanked the Lord for three things: fried chicken, potato salad, and for the fact he had allowed me the privilege of being a Bulldog. “And, Dear Lord,” I prayed, “bless all those not as fortunate as I.”


Fave social media and who to follow (and why)?

* While this may or may not have actually happened, note the proper Southern usage of the verb “fixed.”

FOR RECENT POSTS on THE SOUTHERN C BY CHERI – click here