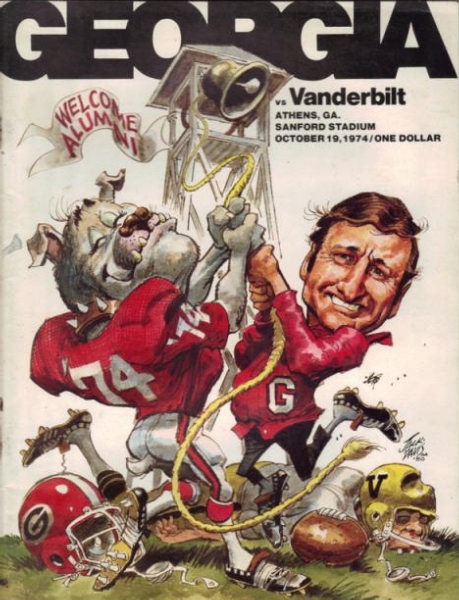 Vince Dooley
Too many occasions to remember … fishing together with a gentle love of enjoyment, a pair of Bulldog shoes I gave that one would have thought I gave him the keys to heaven! Setting the theme each year for the team and the Bulldog nation with his illustrations and his love and humility of everything BULLDOG! There will never be another quite like him. Blessings to Jack and all his family! 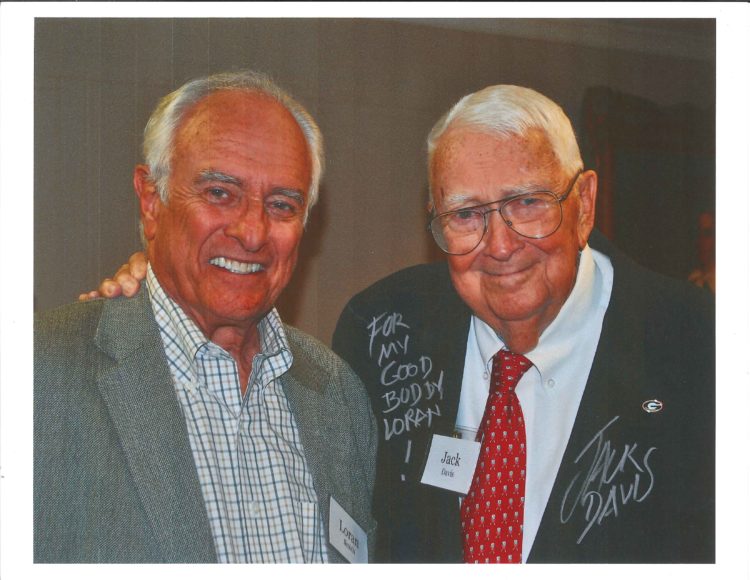 Accomplished men are not always modest men. Jack Davis was the exception. He was a man, who deeply cared about the University of Georgia with a bent for the hedges, Varsity hot dogs, barbecue, grandchildren, golf by the marsh and the chapel bell ringing into the night. He was many things, most of all a “Damn Good Dawg.” 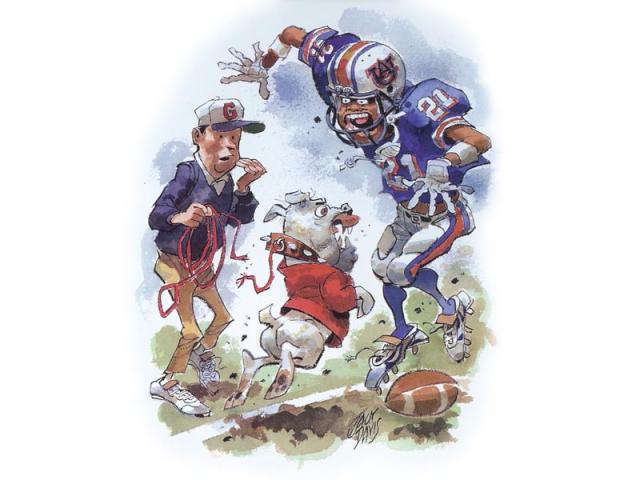 I got to know Jack the best and closest when I was president of the National Alumni Association. The thing I remember most about Jack is, you know we didn’t do emails and all that foolishness, didn’t have computers then, but we’d write notes back and forth and it didn’t take but a day for you to get a note from Savannah to Brunswick, St. Simons, and back. And whenever Jack wrote me back, he would always draw a picture of himself with his signature. Instead of having PS, he’d have something clever to say about something or somebody but it was always related to the Dawgs. He loved Uga and I would always send him real pictures of the mascot that he collected and, in turn, he would do a cartoon of that particular dog. His most famous I think is the one he did of Charles (Sonny’s son) and Uga V going after the Auburn player. And that cartoon made Sports Illustrated. Jack was just a lovable guy. He was fun to just sit down and talk to.

Greg McGarity
Jack Davis brought creativity and uniqueness to the University of Georgia with his caricatures in virtually every aspect of life as a Bulldog. Jack’s amazing talent allowed him to capture the right emotion at the right time, regardless of the sport or topic. We will miss him, and are grateful we were able to enjoy his work for decades.

Claude Felton
Jack portrayed the Georgia Bulldogs as only he could. He captured the fancy of the fans in his caricatures of the great athletes and coaches who wore the Red and Black and the passion we all had in triumph over our opponents. In his most unassuming way, Jack was one of the Georgia Bulldogs’ greatest treasures.

Jeff Dantzler
Jack Davis was a bonafide artistic genius, who’s unparalleled talent touched fans of numerous genres for seven decades. He was a Titan. Jack Davis was also one of the kindest, most generous and beloved men I, or anyone, ever knew. He touched so many lives in so many ways, and anyone who ever knew him had nothing but glowing things to say about him. What he did for Georgia through his remarkable drawings cannot be measured. Jack will forever be one of the Bulldogs’ greatest legends. He was always so wonderful and encouraging to me and as a lifelong fan of this amazing artist and then friend of this incredible man, the times I was blessed to spend with Jack Davis are some of the most treasured of my life.

When our daddy died, Jack had picked it up in the paper and knocked on my sister’s door. Her name is Elizabeth and he wanted to tell her how much he loved my daddy. It shocked her because she had never seen Jack or anything, though he may have been mentioned in the papers or something. He stayed there and talked a long time and she was flabbergasted he had come by himself to tell her about knowing my daddy. Jack was just a long-time personal friend. We went to the same high school and finished our last year of grade school together. Jack loved athletics and I actually talked him into coming out for track. He was long-legged and could run pretty good but Jack was so nice he couldn’t really play football because he wouldn’t hurt you. His cartoons were something else and you know, he also drew for Georgia Tech in high school.

As an architect, people asked me why I also didn’t do cartoons but from the time I was 11 years old, I just loved architecture and my dad was behind me and supported me 100 percent. Dad’s cartoons were reflections of his personality and were versatile and liked by everybody. 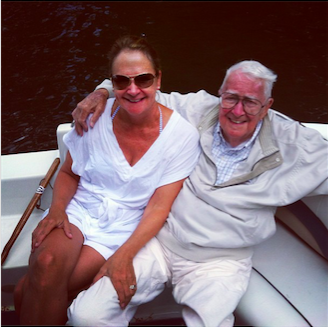 When I think about my dad I think about how giving and humble he was. He loved sharing his artwork and seeing the reaction of others to his work, but what he enjoyed and loved most of all was spending time with family.

Jack was like having a best friend and father-in-law rolled up into one. Was always up for playing golf or icing down some beer and going for a boat ride around the marshes of St. Simons. Doesn’t get any better than that. 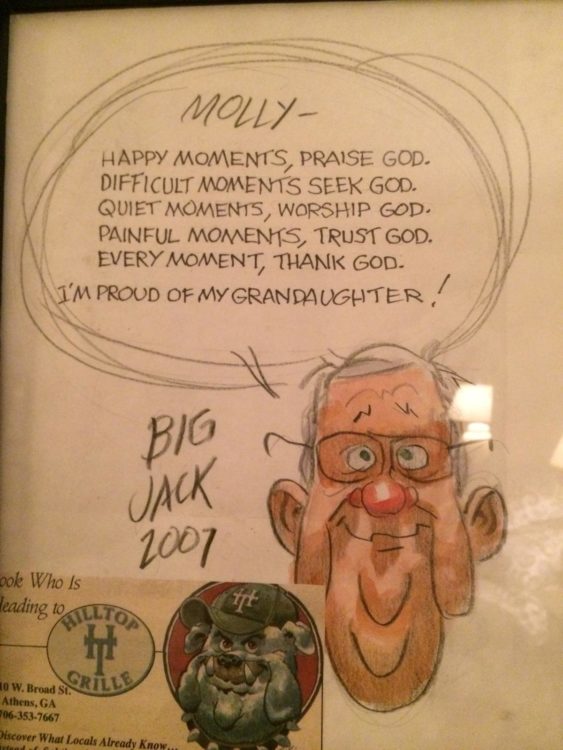 Molly Lloyd
Big Jack was the large funny granddad to us, constantly playing pranks and passing us 20 dollar bills without Dena noticing. You could always find him on his porch with a grapefruit and vodka, looking at his view which he called “the closest thing to heaven.” He never missed an event of ours and documented it all; he would have been ecstatic if you could have replaced his right eye with a camera. To us, he was just the granddad that drew caricatures of our friends and the Spartan for Athens Academy. Big Jack was very humble … most times we forgot he was famous. But Sara and I, on the other hand, have made it known many times that our claim to fame is that our names are hidden in the Bulldawg drawings — who wouldn’t? 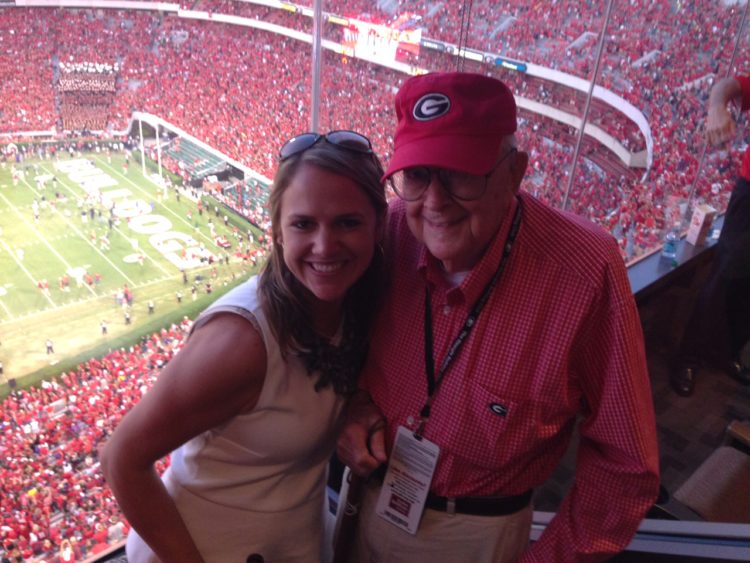 Big Jack was one of the most inspiring people I have ever met, and I was beyond lucky to call him my grandfather. I have never met anyone who appreciated every single aspect of life so much. I never knew of him to have a bad day. He really knew how to be happy, and I try to carry his way of life with me every day.