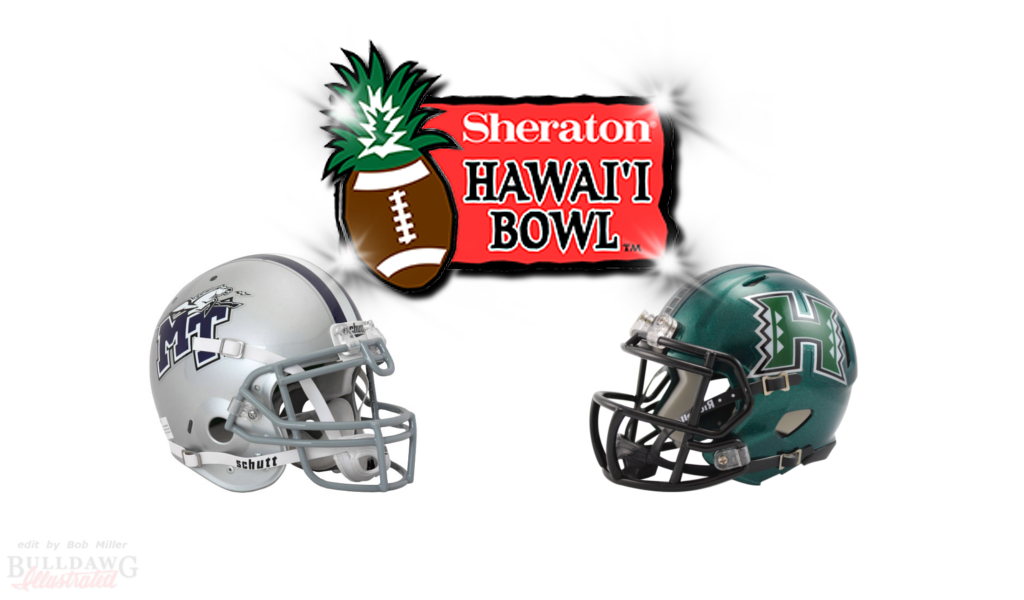 “Twas the night before Christmas, when all through the house, not a creature was stirring” (1.) … well except me watching some college football and munching on snacks.

You can too, and don’t worry. Watching college football on Christmas Eve won’t get you on Santa’s naughty list. Everybody knows the big jolly elf has got be a college football fan. Why I bet he played on the offensive line back in his day. But I remiss. Yes. It’s the Hawaii Bowl. The festivities will kick off at 8:00 p.m. tonight and feature the (8-4) Middle Tennessee Blue Raiders vs. the (6-7) Hawaii Warriors.

The Raiders are favored by six over the Warriors, and although the boys in emerald green may be home crowd favorites, I don’t think that will be enough to propel them into the win column. Neither team plays defense all that well; so, one would expect this to be a high-scoring affair. Hawaii sophomore QB Dru Brown has been up and down all year, and Middle Tennessee’s QB has a broken collarbone he has been healing up from since November 12th. He is questionable for the game, and if he does play, how effective will he be. If he doesn’t, John Urzua hasn’t exactly shown he can be reliable. The difference maker out of all the players on the field is the Blue Raiders’ running back, I’Tavius Mathers; who has rushed for over 1,500 yards and 16 touchdowns on the season.

I’ll take Middle Tennesse and the points 48-35 and the Blue Raiders will get an early Christmas present with a bowl win.

Note: 1. From Twas the night before Christmas by Clement Clarke Moore, 1822.