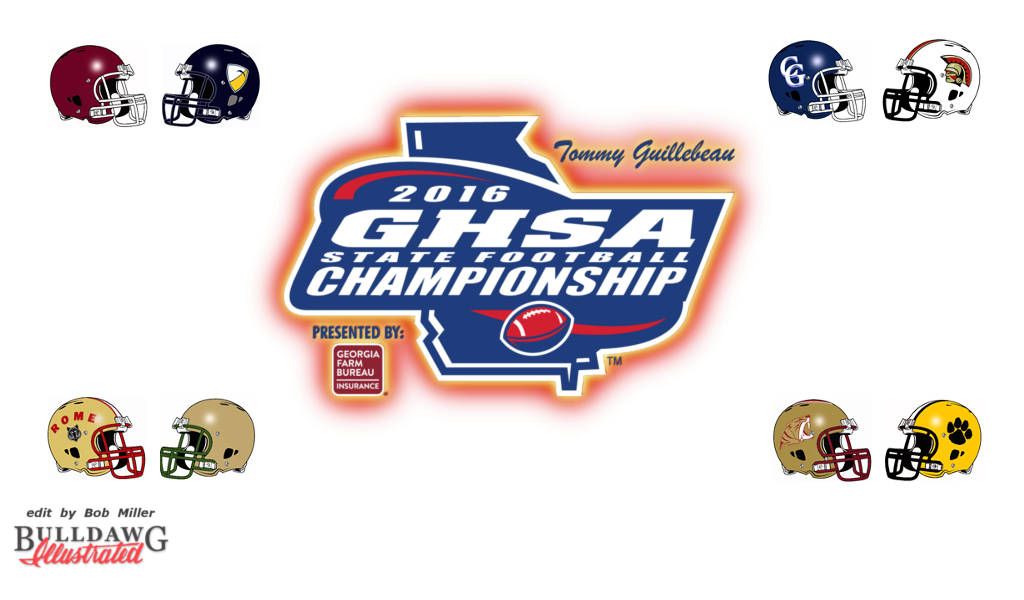 Today begins the Georgia High School Football State Championships, and eight teams will vie for the state title in their classification in 4 games in the Georgia Dome in Atlanta. Eagle’s Landing Christian and Fellowship Christian in Class A Private will kick off today’s action, and they will be followed by the Class AAA, Class AAAAA, and Class AAAAAA finals. The remaining classifications will conclude the state championships tomorrow, starting with the Class A Public final at 10:00 a.m. ET.

All games will be televised live on GPB-TV and via live stream online at GBP.org and the NFHSNetwork.com. You can also catch live broadcasts of the games on the radio on the Georgia News Network (GNN) and on WCNN-AM 680 The Fan as well as via audio stream at 680 The Fan.

The Class A private championship game is one of only two match-ups this year in the finals between two undefeated teams. Fellowship Christian is led by an offensive trio consisting of quarterback Jack Hardin and running backs Andrew Johnson and Andrew Minkert. Those three have combined for over 36 touchdowns and 2,500 yards of offense for the Paladins on the season. Certainly a tough test for perinnial power ELCA’s defense.

The number 2 seed from Region 5, Cedar Grove, will face the Region 7 champs and number 1 seed GAC in the Class AAA finals. GAC is 13-1 on the year with their only loss being to a high school team from Highlands Ranch, Colorado, Valor Christian. Meanwhile, Cedar Grove is 12-2 on the year with losses to Westminster and Southwest Dekalb early on in the season. To get to the finals, the Saints blew the doors off the undefeated Region 1 champs, Crisp County, on the road in Cordele, GA 55-0.

Can 2017 UGA commits Netori Johnson and Justin Shaffer pave the way for the Saints’ offense and senior quarterback Jelani Woods, Oklahoma State commit, and running back Grant Walker, who has rushed from over 1,800 yards, to a state title? And Cedar Grove’s defense has a tough task in reigning in senior quarterback David Mills, who is headed to Stanford in 2017, and running back Kyler McMichael, who has rushed for over 2,000 yards on the season. Whichever teams wins the game will bring their school it’s first state title in football.

The battle of the Wolves in Class 5A between number 1 seed and Region 8 champs Buford and the number 1 seeded and Region 7 champs Rome. Buford is 13-1 on the season, having only lost to Class 7A power Roswell back in their opening game of the season. Rome comes into the game at 12-2, having losses against Harrison and Kell.

Will Buford’s defensive leaders Jack Ness, T.D. Roof, and Jake Simpson be able to slow down Rome’s ground game featuring a couple of 1,000 yard plus backs in 2018 RB Jalynn Sykes and 2019 RB Jamious Griffin? Plus, keep your eye on 2018 UGA commit Adam Anderson on Rome’s defense. Will they be able to weather Buford’s depth and own 1,000 yard plus backs in Anthony Grant and Christian Turner?

Valdosta will be playing for their 24th state title but it will be their first appearance back in the title game since 2003. The Wildcats last won the state championship in 1998. Tucker has two state titles to their name, their last coming in 2011, and the Tigers were a runner-up in 2013. Valdosta’s defense will have their hands full slowing down Tucker’s rushing attack with Taurean Taylor and Chris Broadwater who have combined for over 2,400 yards and 37 touchdowns.

For more information on the GHSA State Football Championships including directions to the Georgia Dome along with parking and ticket information, please CLICK HERE.