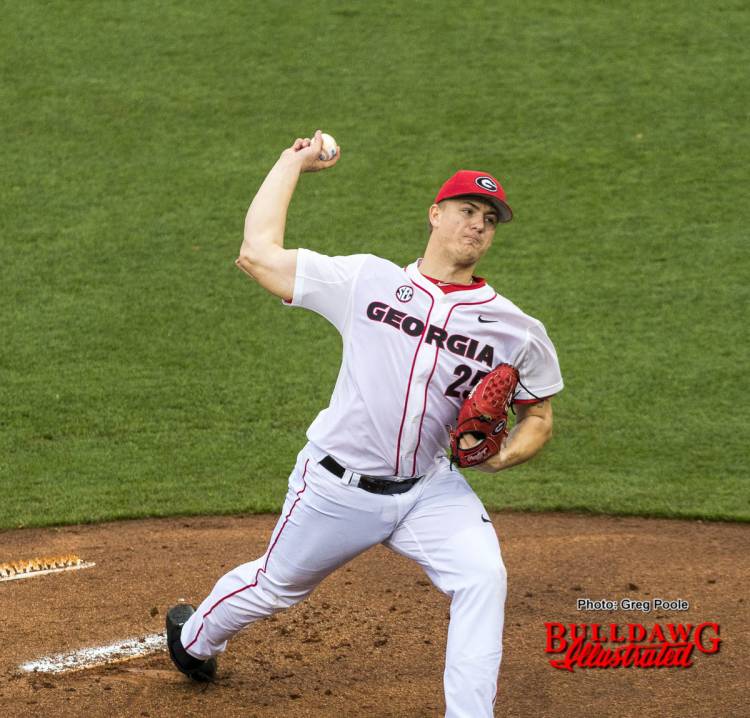 The UGA baseball team struggled in both facets of the game against the College of Charleston in the second game of the series, which ended in a 15-6 loss. The Bulldogs have some improvements that will need to be made in order for them to earn more victories.


Bulldogs’ starting pitcher Tony Locey had a start very similar to that of the Bulldogs’ Opening Day pitcher Kevin Smith. Locey started off the game with three quick outs in the first inning but struggled from there on out. Locey only completed three innings of work and allowed five hits and seven runs, with three walks and a strikeout. Although Locey’s line is less than impressive, he showed flashes of dominance and I believe he will be one of the Bulldogs’ best pitchers by the end of the season.


The College of Charleston Cougars’ bats were hot today, but their plate discipline was a huge difference in the game. The Cougars went into the fourth inning with a 3-1 lead but broke the game wide open by batting around and adding 7 runs while only totaling two hits. Although that stat may seem surprising, the Cougars found other ways to get on-base including three walks, one error, and one batter was hit by a pitch.


After a huge fourth inning, the Cougars went into the fifth with a 10-1 lead and batted around yet again in the fifth inning while adding another 5 runs on only 3 hits. However, the most discouraging stat in the inning is the fact that the Cougars had 9 different base runners, with 5 runners getting on base via walk or getting hit by a pitch.


The Bulldogs gave up too many free bases in the game, with 11 walks, 4 batters hit by pitches, and 1 error, which made the day much easier for the Cougars’ offense. They will have to address the issue of giving up free bases sooner rather than later if they want to become serious contenders.


The Bulldogs relief pitching, for the most part, had a decent day with Ryan Avidano, Trevor Tinder, Shaefer Shepherd, Tim Eliot, and Justin Glover all receiving some work. Avidano was the only reliever to give up runs, but he gave up 8 earned runs during his time on the mound. However, the rest of the pitchers were able to keep the Cougars off the board, but each reliever did give up at least one walk.


The Bulldogs’ batters had a much better day than yesterday as they totaled 12 hits and 6 runs. One bright spot for the team was first baseman Adam Sasser, who went three for four, which was a career high, and scored three of the Bulldogs runs with three RBI’s. Sasser has reached base in every at-bat this season and got on today with 2 home runs, a double, and a fielder’s choice. Sasser should see an increase in playing time due to the Bulldogs’ struggling offense.


The Bulldogs will hope to right the ship on Sunday as they face College of Charleston on Sunday at 1:00 p.m. for the third and final game of the series.


Star of the Game: Cougars’ Offense

The Cougars’ offense was on fire today and it was very much a team effort, with every starter getting on base at least once and every starter, but one, getting on base twice or more. The Cougars’ batters stayed disciplined at the plate and capitalized on the Bulldogs’ mistakes. The vast amount of walks they earned paired with the 10 hits lead to a very impressive offensive display.