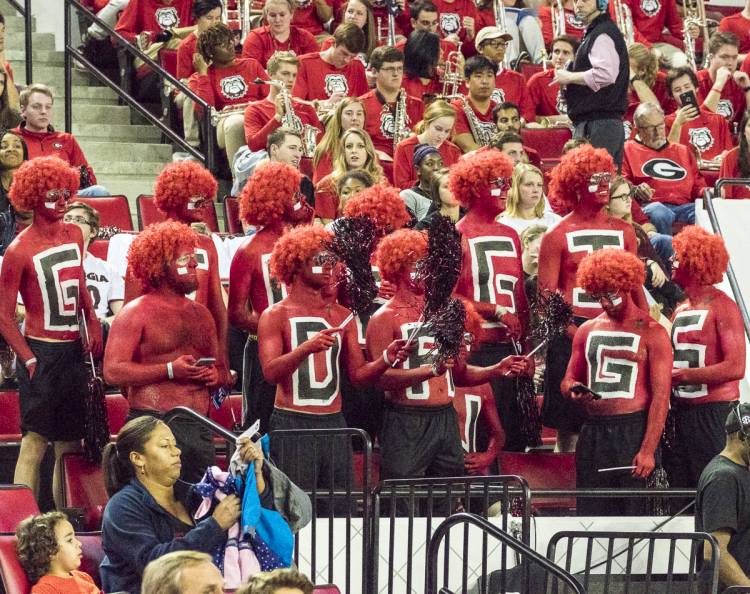 
The Georgia men’s basketball team are back home in Athens after a big win over Alabama on Thursday in Tuscaloosa. Now, the Hoop Dogs host LSU for a 6:00 p.m. ET tipoff this evening at Stegeman Coliseum.

Senior guard J.J. Frazier scored 28 points to lead the Bulldogs in a 60-55 win over the Tide. That result improved Georgia’s records on the season to 16-12 overall and 7-8 in the SEC. That league mark is somewhat deceiving considering the Bulldogs are the only team to play Kentucky, Florida and South Carolina – the trio atop the league standings for most of January and February – twice. Georgia is 7-2 against the rest of the SEC.


Frazier continued his spectacular run of late. The 5-10, 155-pound senior has averaged 27.5 ppg over Georgia’s last four outings. Frazier’s scoring averages have seen dramatic increases for this deep into the season. His overall average has jumped from 16.0 ppg to 17.7ppg, while his production in SEC games has improved from 17.3 ppg to 20.0 ppg. Among league scoring leaders, Frazier now ranks fifth overall and third in league action.


Frazier’s production helped offset the loss of Yante Maten, who has been the SEC’s second-leading scorer for much of the 2016-17 campaign. Maten, one of 10 players on the final watch list for the Kareem Abdul-Jabbar Award as the nation’s premier center, suffered a sprained right knee 95 seconds in to last Saturday’s game against No. 13 Kentucky.


“Obviously, our team was mostly built around Yante so we will have to redesign some things, but we aren’t going to be able to reinvent ourselves completely this late in the year,” Mark Fox said on Tuesday. “Our other guys are going to have to step up and play a little bit bigger role, and we will have to be a little smarter and stay out of foul trouble and be very efficient with how we play.”


Before and after Maten’s injury there were signs certain Bulldogs were ready to increase their contributions down the regular-season’s home stretch.


In his first career start two Saturdays ago at Tennessee, freshman Tyree Crump scored 13 points – including five in stretch of 17 seconds that pushed a one-point lead to 70-64 – in a 76-75 victory. Crump also knocked down two critical second-half 3-pointers in Tuscaloosa on Thursday.


Against Kentucky, sophomore Mike Edwards posted his first career double-digit point tally against SEC competition with 10 points, doing so in a career-most 34 minutes.


Juwan Parker has been Georgia’s third-leading scorer for the majority of the season but has stepped up his production in league play. Parker averaged 8.0 ppg in non-conference play but is contributing 10.8 ppg in SEC action. That has upped his season average to 9.6 ppg.


Antonio Blakeney leads a trio of double-digit scorers for the Tigers at 17.8 ppg, while Duop Reath and Brandon Sampson chip in 12.7 ppg and 11.1 ppg, respectively.


J.J. Frazier is three 3-pointers away from becoming the first Bulldog ever to have 100 assists and 50 3-pointers three times.


Juwan Parker had one double-digit scoring performance in his first 58 games at UGA. In his last 20 games, he has hit double figures 13 times, including 11 of 15 SEC outings.


Derek Ogbeide has six double-digit rebounding efforts in UGA’s last nine games. He is averaging a team-high 7.5 rpg, including a more impressive 8.3 rpg in SEC play.

Approximately 50 Georgia Basketball alumni, including former coaches, players and support staff, will be recognized at halftime of the Georgia versus LSU men’s basketball game. Former coach Hugh Durham will also be recognized for his induction into the National Collegiate Basketball Hall of Fame last November. There will also be a special ceremony recognizing UGA football for an NCAA Sportsmanship Award for its first-response care and subsequent support for injured Southern University football player Devon Gales and his family.