Georgia ended the first part of the season on a high Thursday afternoon. The Lady Dogs defeated Wright State 71-87 and heads into Christmas break 11-1. Georgia got into the season of giving as 10 of the 12 players who got minutes scored points.

Mackenzie Engram led the Bulldogs with 20 points which marked her third 20-point outing of her career. The double-digit scoring performance is her 10th of the season. Engram shot 8-11 from the field, tying a personal best. Three other Bulldogs scored double-digit points and six others scoring at least two points. Caliya Robinson collected 12 points, seven rebounds, five assits, and three blocks. Taja Cole and Que Morrison followed with 11 points.

Georgia shot a season-high 55 percent and score the most points of a Wright State opponent this season. The win was number five over an opponent that won at least 20 games last season. Both teams supplied nine 3-pointers apiece, however Georgia’s 52.9 percent from the arc beat Wright State’s 39.1.

To start the game, the Lady Bulldogs cruised out to a 20-6 run, keyed by a 13-point surge by Engram on 6-6 shooting in the first quarter. Those 13 points were the most scored by a Georgia player in a quarter this season. Robinson collected six first-quarter points as well and Georgia finished the quarter with a 24-15 lead. The Bulldogs finished the first quarter with 16 points in the paint.

During the second quarter, Biana Blanaru paced Georgia in the second quarter, notching a season-high five points early. Engram continued her hot streak as she sunk a jumper to extend the Bulldogs lead to 11 with less than 2 minutes left in the half. She ended the half with 15 points. The Lady Bulldogs finished the half with an alley-oop play from Cole to Robinson. The score moved Robinson into double-digit points with 10 and pushed Georgia to lead 41-31 at the half. 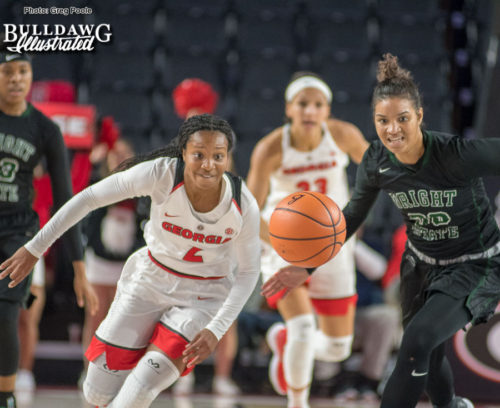 Wright State made a comeback during the third quarter coming as close as four points, but the Lady Dogs always came back with an answer. The momentum swung back to Georgia after a 3-pointer by Simone Coasta with 3:20 left to go in the third. Then another Lady Dog got on a hot streak as Gabby Connally closed out the quarter with a 6-0 run of her own. She scored a 3-pointer and a steal-turned-layup to make the score 64-54 headed into the final period.

Engram sunk a 3-pointer within the first minute of the fourth quarter and then Morrison hit a jumper to extend the edge to 69-54. Maya Caldwell sunk a pair of threes before a 10-4 Lady Dog run fueled the last minutes. To seal the win, Stephanie Paul tipped-in a shot which gave the game its final score of 87-71.

“I think we’ve played pretty unselfish all year long,” Georgia head coach Joni Taylor said. “If you look at our stats, we’re shooting it better than we have the last couple of years. Because of the players we have and their commitment to getting better, it’s tough to play us in a zone defense.”

The Lady Dogs return to Stegeman on Thursday, Dec. 28  to take on North Florida and tipoff is set for 2 p.m.