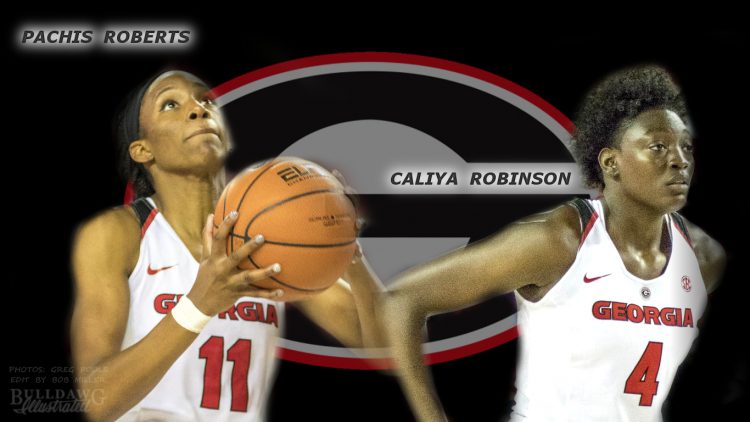 Pachis Roberts and Caliya Robinson earned All-SEC honors for their outstanding play during the regular season for the Georgia women’s basketball team.


The two have been instrumental in helping the Lady Bulldog basketball program to a strong finish during the 2016-17 regular season, leading the team to wins in five of their final eight conference games en route to a No. 8 seed in the SEC Tournament.


“When you earn All-SEC honors it means you have put your name among some of the great players nationwide,” head coach Joni Taylor said. “We play in the best conference in women’s college basketball and there are so many deserving student-athletes. For Pachis, it is really remarkable to think that she started just 13 games entering this year. To watch her progression into our top scorer and rebounder and to see her become one of the most consistent players in this league night-in and night-out has been absolutely amazing.


“And then for Caliya, she has built on a tremendous freshman season to become one of the top players in our conference on both ends of the floor. Among other accomplishments, to lead the SEC in blocked shots for a large portion of the year and to earn the ESPNW National Player of the Week honor earlier this season — those are two great achievements and they speak to her continued success as one of the premier players in this league.”


A native of Powder Springs, Ga., Roberts stepped up to lead the Lady Bulldogs this past season. Not only was she the team’s top scorer and rebounder, she was also the only player in the SEC to rank in the top-15 in both categories as well as steals and assist-to-turnover ratio. She scored in double figures 23 times, including double-digit totals in 14 of 16 regular season SEC games. Roberts reached the 20-point mark on five occasions, while all five of her career double-doubles came during her senior year. Due to a roster that featured just eight scholarship players, she finished third in the SEC in minutes played and went 40 minutes or more a total of nine times during the 2016-17 campaign.


Robinson, who hails from McEachern High School in Marietta, Ga., established herself as the top shot-blocking presence in the SEC this season. A year after placing on the All-Freshman Team, Robinson added to her already sizable list of accolades by becoming only the second Lady Bulldog all time to earn the ESPNW National Player of the Week honor when she scored 28 in a win against Tennessee and 20 in a victory over Arkansas earlier this season. Robinson, who currently leads the SEC in blocked shots per game with 2.4 per contest, owns the top two single-game blocked shot performances and is tied for the third-best in the league this season. She has also been a threat on the offensive end, finishing the regular season as the team’s second-leading scorer with 13.8 ppg, while scoring in double figures in 21 of 29 games.