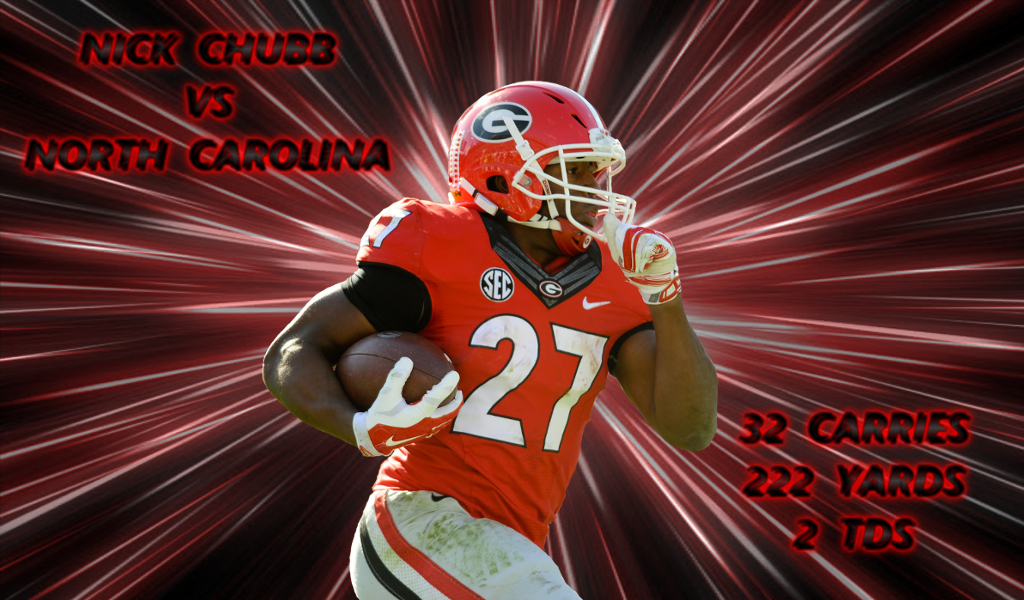 ATLANTA – Prior to Georgia’s season opener against North Carolina in the Georgia Dome, several of Nick Chubb’s teammates pitched a message to Bulldog fans.

It was this: That the Georgia tailback was back better than ever after rehabbing from his gruesome knee injury suffered last season at Tennessee. Here Saturday night in the Chick-fil-A Kickoff Game, the Bulldawg Nation saw for itself the amazing comeback of Georgia’s junior bulldozer. Carrying the ball 32 times into the teeth of an improved Carolina defense, Chubb romped for 222 yards on a whooping 32 carries to spark the Bulldogs to a 33-24 win over the Tar Heels and thus make Kirby Smart’s head coaching debut a rousing success. It was a new kickoff game record and the third time of his career that Chubb had crashed the 200-yard rushing barrier.

Chubb scored twice, a 2-yard run in the opening quarter and then a 55-yard burst down the right sidelines in the game’s waning minutes to effectively salt this one away.

“I don’t guess Nick was on a pitch count,” mused Smart in his post-game press conference.

Chubb, humble as ever while sitting beside Smart in the presser, said it just felt good to be back on the field and be able to help his teammates win a football game.

“It feels great to come out here and get a win in game one,” Chubb said. “We busted our tails all summer. It was a great experience. My teammates motivated me. My family and everyone around me pushed me and made sure I worked hard. (On carrying 32 times) It didn’t bother me, I felt good.”

“People don’t know how hard this guy has worked in being able to make it back like this,” said Smart, motioning to Chubb on his left.

‘’Our goal tonight was two-fold,’’ Smart said. ‘’We wanted to help our players understand how to play Georgia football.  What that is, and get them to give the effort to play with the competitiveness and toughness that we want.  That was it.  It wasn’t about the scoreboard.  It was just about doing that.  I felt like if they did just that, then I’d be comfortable with how they played.

‘’They were resilient, they had adversity and they kept fighting,” said Smart. “There were a lot of doubters when the ball got kicked off and run back to start the second half. A lot of ‘here we go’s.’ But not one kid on that sideline doubted it. I really thought our line of scrimmage was the difference in the game,’’ Smart said.

But Nick Chubb wasn’t a one-man gang in this victory … by any means. Senior quarterback Greyson Lambert started the game and had several key completions on the Bulldogs’ initial touchdown drive, and then highly-touted freshman Jacob Eason took the reins and displayed his powerful passing arm while helping the Bulldogs erase a 24-14 third quarter deficit.

Eason finished the night with eight of 12 completions for 131 yards including a 51-yard strike to Isaiah McKenzie down the right sideline. Lambert was 5-of-8 for 54 yards. McKenzie had a big receiving night with six catches for 122 yards and also tallied a touchdown via a 19-yard run. In addition to Chubb’s mammoth rushing night, freshman Brian Herrien also acquitted himself well with 59 yards on just seven carries as the Bulldogs ran for 289 on the evening.

Defensively, Mel Tucker’s unit stood tall when it counted, limiting the explosive Tar Heels to 159 yards on the ground and 156 through the air. Cornerback Malkom Parrish set the pace with seven tackles while sophomore linebacker Roquan Smith followed with six stops and made the defensive play of the game when he trapped Carolina tailback Elijah Hood for a safety in the waning minute of the third quarter to pull the Bulldogs within 24-23 and set the stage for the stirring fourth-quarter rally. Freshman David Marshall rendered the only sack on Tar Heel quarterback Mitch Trubisky.

Behind Chubb’s runs, including a 22-yard scamper to the Carolina 22 and several key completions by Lambert – one a 25-yarder to McKenzie – the Bulldogs wheeled 79 yards on 10 plays to get on the board first.  At the end of Chubb’s dash, a personal foul penalty on the Tar Heels put the ball on the 11 and after Brendan Douglas got it to the 2 in two carries, Chubb tallied his first touchdown of 2016. William Ham’s kick made it 7-0, with 4:40 left in the first.

The Tar Heels would strike back to tie it on a 1-yard keeper by Trubisky in the opening minutes of the second quarter, a 39-yard scamper by T.J. Logan highlighting the 52-yard scoring drive.

Then, after Douglas fumbled the ball away following a 14-yard run to the Carolina 12, Georgia came back via a 56-yard drive engineered by Eason. Another freshman, tailback Herrien, got the score on a 19-yard dash around right end, and Ham’s kick put the Bulldogs up 14-7 with 6:22 left until halftime.

North Carolina would then make it a 14-10 tally at intermission on the strength of a 22-yard field goal by Nick Weiler with just 11 seconds remaining.

The third period then turned wild and wooly. The Tar Heels would reel off 14 unanswered points to go up 24-14, the scores coming when that speedster Logan returned the second half kickoff 95 yards and then added insult to injury later in the quarter by going 21 yards for his second score of the night.

But then here came the Bulldogs again. With Eason directing the attack, Georgia marched 75 yards, most of the real estate coming via two pass interference calls against the Heel secondary. McKenzie then found the end zone on a stirring 19-yard run, diving into the flag on a play that was first ruled dead at the 1. But after the review, the Bulldogs had pulled within 24-21 with 1:19 left in the quarter. Still, Georgia wasn’t done. After backing North Carolina up at its own 3-yard line, Tar Heel QB Trubisky dropped back into the end zone and under a heavy rush, tossed a quick pass out to Hood. Only problem was, Hood was trapped in the end zone for a safety by sophomore linebacker Smith. The two-pointer drew the Bulldogs to within one, 24-23, with only 48 seconds left in the third.

The game then surged in the final stanza and it would be a 29-yard field by Ham – who had misfired on a  first half attempt of 42 yards – that would actually give the Bulldogs their winning margin. Ham’s kick blinked the scoreboard to 26-24 with just 5:27 to play. And Chubb would then put the nail in the Heels’ coffin with his stirring 55-yard touchdown jaunt with 3:34 remaining.

Georgia, entering the game with a No. 18 ranking, will go between the hedges of Sanford Stadium for the first time this year on Saturday when the Bulldogs play host to the Nicholls State Colonels.