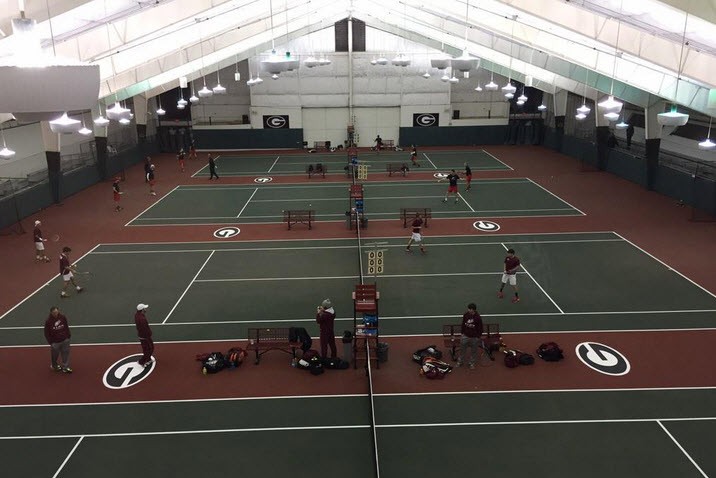 [break] The eighth-ranked Georgia men’s tennis team (1-0) won its 2015 opener 4-1 over Michigan State (1-3) in the ITA Kickoff. The Bulldogs lost the doubles, but won four consecutive singles matches to secure the victory.

[break] [break] Georgia will face Utah Sunday at 1 p.m. for a berth in the National Team Indoor Championships.
[break] [break] “Michigan State played a great match and really challenged us,” Georgia coach Manuel Diaz said. “They played especially well in doubles. I was pleased with the quality of our doubles, but I didn’t think we did as good of a job as we needed to do in the crucial points. They seemed to raise their level, and we maybe were a little bit more tentative today.”
[break] [break] Georgia lost the doubles point after losing on courts Nos. 1 and 2. On court No. 3, Nathan Pasha and Nick Wood provided a dominant 6-2 effort over the Spartans’ Harry Jadun and Jasper Koenen. Austin Smith and Eric Diaz lost 7-5 to Michael Dube and Mac Roy, setting up the deciding match on court No. 1. The No. 16 tandem of Ben Wagland and Paul Oosterbaan fell in a tiebreaker, 7-6 (7-4) to Michigan State’s Brett Forman and Gijs Linders.
[break] [break] The Bulldogs responded quickly in singles, winning the first set on all four indoor courts. Ben Wagland notched the Bulldogs’ first victory on court No. 4, defeating Roy, 6-4, 6-3. No. 11 Austin Smith quickly followed with a 6-2, 6-3 win over Brett Forman before No. 101 Nick Wood added to Georgia’s singles dominance with a 6-3, 6-2 line against Harry Jadun. Sitting on a 3-1 lead, No. 15 Pasha clinched the match for the Bulldogs with a three-set victory over No. 76 Linders, 6-1, 7-6 (5), 6-2 on No. 1. Freshmen Oosterbaan and Peter Bertran won their first sets before play was suspended.
[break] [break] Before the Georgia-Utah match on Sunday, Michigan State will take on No. 55 Elon in the consolation match at 5 p.m. on Saturday.
[break] [break] Said Diaz on facing Utah: “They’re a scrappy team and an extremely competitive team and we have to come out ready to play with our best.”
[break] [break] #8 Georgia 4, #62 Michigan State 1