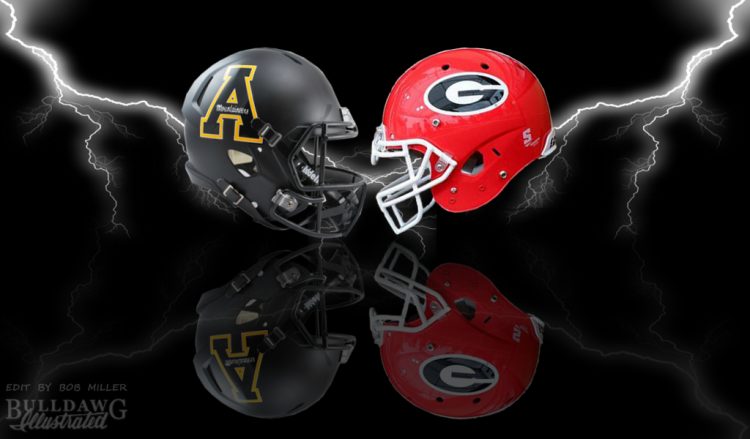 Ten years – and one day – prior to Saturday’s clash between the hedges, Appalachian State pulled off one of the most memorable upsets in college football lore. On September 1, 2007, the Mountaineers, Division 1-AA kingpin, stunned Michigan 34-32 in the Big House. A third straight national title would follow, and the upset of the Wolverines thrust Appalachian State into the national limelight.


So here we are a decade later, and the Mountaineers venture to another of the country’s grand stages, eyeing another upset. Appalachian State is now a member of college football’s highest division, and coming off an excellent 10-3 campaign that culminated with a bowl victory and began with a heart­breaking near upset of Tennessee in Knoxville.


Georgia heads into its second season under the watch of Kirby Smart, who is furiously working to get the Bulldogs back amongst the country’s elite. The Bulldogs are coming off an 8-5 season that was derailed by a trio of devastating, borderline implausible losses at Sanford Stadium.
Becoming a great team at home is a must, and Saturday’s showdown is a major test for the Bulldogs, favored by 14.5 points.


While a highly anticipated trip to Notre Dame awaits, even the most confident of Georgia fans are well aware of just how talented and dangerous the Mountaineers are. The win at Michigan and the near miss at Tennessee are certainly enough to grab anyone’s attention. And those three crushers at home last season, plus the frightening survival against Nicholls State, Georgia can take no team for granted, especially one as talented as the Mountaineers.


Smart’s team is well aware of Appalachian State’s prowess and some unbiased statistical facts from a year ago. There were six different polls last season that used a power rating and strength of schedule formula. Four had the Mountaineers ranked ahead of the Bulldogs.


There is great excitement and anticipation for the Bulldogs 2017 season. The defense brings back nine or 10 (depending on Malcolm Parrish’s injured foot) starters and the heralded tailback duo of Sony Michel and Nick Chubb while welcoming in an elite recruiting class.


The future is bright. Saturday is the first indicator of whether it begins now.