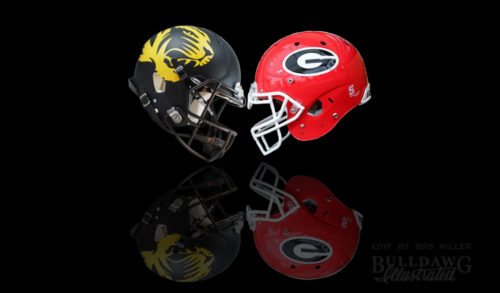 At the midpoint of the regular season, Georgia rolls into Saturday night’s showdown with Missouri sporting a perfect record of 6-0, 3-0 in the Southeastern Conference.


The Bulldogs put up another impressive showing last weekend, running for 423 years in a 45-14 victory at Vanderbilt. For the first time since the SEC championship season of 2005, the Bulldogs are 6-0. Since the thrilling 20-19 win at Notre Dame in the second week of the season, Georgia has beaten Samford 42-14, Mississippi State 31-3, Tennessee 41-0 and tacked on the 31-point triumph in Music City USA.


Missouri won its opener with a big number against Missouri State but has struggled since. This past Saturday night at Kentucky, though, the Tigers went toe-to-toe with the Wildcats, falling 40-34 as the last shot would-be-game winning TD pass came up short.


It was proof again that anything can happen, and if the underdog hangs around, they have a shot.


There is nothing to lose for the upset-minded Tigers. As they try and pull off a shocking upset, the Tigers could draw on past performances in Athens. On their other two trips to Sanford Stadium, the Tigers outstanding 12-2 team of 2013 whipped the Bulldogs 41-26, and then two years ago, Georgia escaped with a 9-6 victory in a touchdown-free 2015 contest.


But this Georgia team has a different look.


Second-year Bulldogs head coach Kirby Smart has a good saying that hits home to the team and this energized, hungry Georgia fan base – “humility is just a week away.”


Watching him on the sidelines, just as intense at 45-7 as at 0-0, Smart is driving this Bulldog squad to perform at maximum efficiency every week, every play, every rep in practice.


Veterans like senior tailbacks Sony Michel and Nick Chubb, who combined for 288 yards on the ground in Nashville, returned for a final year to take care of some unfinished business and leave a great legacy. So far, so good in 2017.


Avoiding that upset trap, those team leaders play just as big a role throughout the week as the coaches do.