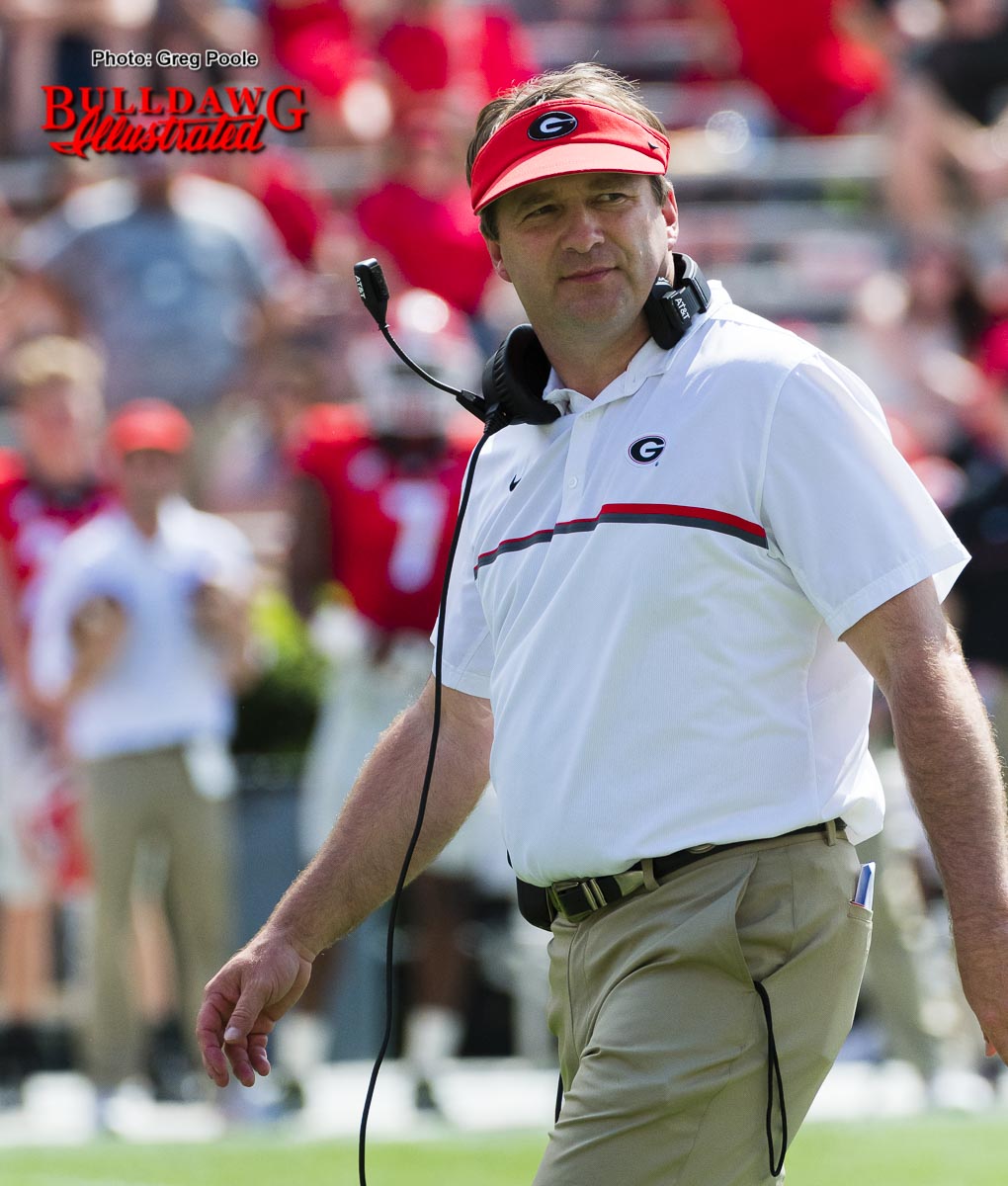 The SEC, once the pinnacle of the head coaching ranks, has lost its place on the throne.  There is Nick Saban and then everyone else.  So how does the current head coaches in the SEC stack up?  Find out inside!

Nick Saban is the best football coach in the SEC and no other coach in the conference deserves to breathe the same air as Saban.  With four national championships in the past eight years and three consecutive SEC Championships, the Crimson Tide have owned the SEC.  When you combine “the process” with nations #1 rated recruiting class for an astounding seven consecutive years (according to the 247Sports Composite) you get exactly what Alabama is – a dynasty.  The only potential knock on Saban that he has still struggled to adapt his defense to shut down dual-threat quarterbacks.  That said, nobody is perfect, but Nick Saban is as close as it gets.

No coach in the SEC has done more with less than Dan Mullen.  In his eight years in Starkville, the Bulldogs have averaged the nations 27th recruiting class.  One could argue that his lack of recruiting prowess is a weakness but have you ever tried to convince a 17 or 18-year old stud athlete that Starkville, MS is a fun place to spend the next 3-5 years.  Despite playing in the most brutal division of college football the fighting cowbells have managed three 9 win seasons and have risen to as high as #1 in the AP poll during the 2014 season.  Mullen’s teams are always well coached and fundamentally sound and we have seen a glimpse of what he can do with elite talent while he was the offensive coordinator at Florida.

Regardless of whether he truly spends his offseason in the buff, spooning sharks, he is still a fantastic football coach.  He did a fantastic job as head coach at Colorado State and in his two years at Florida, he has led the Gators to consecutive SEC Championship showdowns with Alabama.  Known as an offensive guru, McElwain has won at Florida despite largely inept quarterback play.  He has done an excellent job of game-planning around his team’s weaknesses and has a 3-1 record against the Gators top competition in the SEC East, Georgia, and Tennessee.  The one issue that could keep him from taking the next step as a head coach is recruiting.  Despite being in one of the most fertile recruiting territories in the nation his recruiting has been below par and he has largely been winning with former Will Muschamp recruits.

Malzahn being rated as the 4th best coach in the conference goes to show the weakness of the head coaching position in the SEC.  His lone season of success at Auburn came when he had maybe the most dominant athlete at quarterback in the history of college football – Cam Newton.  Without a dynamic athlete at quarterback, his offense has been rendered largely inept.  His inability to adapt his offense to the quarterbacks he has had on the roster even though his team has been loaded with talented skill position players is disappointing.  Malzahn has also had defenses with a great deal of talent that have consistently underperformed.  With Jarrett Stidham standing in the shotgun this season Malzahn has one final chance at redemption or he will be looking for a job somewhere in the Big 12 where he can have success playing gimmick football.

Sumlin comes in at number 5 on this list because in-spite of various difficulties he has never finished with less than 8 wins in five seasons in the most difficult division in the country.  Additionally, in each of his seasons at the helm of A&M the Aggies have found themselves ranked in the Top 10.  Sumlin is another offensive guru whose offense has struggled to live up to the hype but that is largely a result of playing against some of the best defensive units in the country week in and week out.  For the Aggies to take the next step the defense needs to improve and with John Chavis heading up that unit good things will happen for the Aggies.  What I give Sumlin the most credit for his he appears to be learning and adapting to life in the SEC and if Aggie fans stay patient Sumlin’s name could rise up this list.

Bielema is a very good football coach even though his record may not necessarily show it.  He has been dealt a tough hand trying to play smash mouth football in the most physical conference in college football.  Bielema will always play a physical style of football but he has also shown a willingness to adapt, spread the field and throw the football.  Much like Dan Mullen, he is faced with the dilemma of trying to convince 17 and 18-year olds that Fayetteville, AR is a good place to spend a few years of their life.  Watch out for the Hogs to be sneaky good in 2017 and maybe pull off a major upset with senior Austin Allen at quarterback and emerging talent Devwah Whaley exploding onto the scene as a household name.

Kirby Smart comes in at seventh on this list despite only one year of head coaching experience for several reasons.  First and foremost, as I have previously mentioned there are not a number of very good head coaches in the SEC at this moment.  Second, in his first season as a head coach to go 8-5 with a true freshmen quarterback that was playing the equivalent of single-A football in Washington only a few months prior is remarkable.  Smart certainly made quite a few mistakes but many of those were learning lessons that he can correct.  The other reason Smart comes in at number seven on this list is because he showed a clear ability to motivate his players and displayed outstanding recruiting prowess.  The progress he makes on the field as in-game coach during his second season will go a long way in deciding whether he rockets up this list or goes sliding down.

Orgeron’s first stint as a head coach in the SEC at Ole Miss was nothing short of a disaster.  However, after an eight-game audition after the Tigers fired Les Miles it appears that Orgeron has grown a great deal as a football coach.  Orgeron has taken on the CEO role at LSU and that is something that plays to his strengths.  Orgeron can flat out get after it on the recruiting trail and he has shown a knack for getting his players to run through a brick wall for him.  The decision to hire Matt Canada as offensive coordinator was fantastic and Dave Aranda is a proven commodity as a defensive coordinator.  With two outstanding coordinators and Orgeron knowing his limitations he can play the role of CEO and lead LSU to great success on the field despite the fact that 7 in 10 of his players will never understand a word that comes out of his mouth.

Mark Stoops is a name that is rising up this list.  Now entering his fifth season as head coach at Kentucky it appears that he is starting to find his footing.  Kentucky is a tough place to play winning football with the focus of the entire athletic department being directed toward basketball.  Football will always play second fiddle but Stoops is making progress with the product on the field.  He has done a solid job on the recruiting front and in 2016 he led the Wildcats to their first bowl game in his tenure.  He may never rise above a mid-level SEC coach but he could consistently lead the Wildcats to bowl games at Kentucky.  The question is whether or not Kentucky fans and the administration can put aside delusions of grandeur and realize that that is all Kentucky is probably destined to be on a football field.

Everyone knows that Muschamp can flat out coach a defense but there is still a tremendous number of questions as to whether or not he can transition into becoming a successful head coach.  The biggest question is whether he can control his temper and stop transforming from Bruce Banner to the Hulk every time a call doesn’t go his way.  Too often he loses control and his team reacts in kind by losing control.  If he can continue to mature and become more stoic on the sideline his teams may be able to win a few big games.  Add to that the fact that he appears to have the first real quarterback in his coaching career and Muschamp can move up this list in the future.  However, if he keeps having Tyra Banks temper tantrums on the sideline he may move closer to the bottom.

No coach in the SEC has done less with more than Butch Jones.  Jones has had a ton of talent the last two seasons but consistently finds a way to lose close games that the Vols have no business in losing.  Butch is more of a sure thing to wet the bed during crunch time than a three-year-old given a Mountain Dew right before bed time.  Also, there is not one strength you can pinpoint that he can hang his hat on offensively, defensively or as a motivator.  With the Vols heading into the 2017 season with question marks at multiple key positions and Jones questionable coaching ability, Tennessee is at the top of my list for a major regression this season.  If that regression happens, Butch Jones won’t be on this list next year because he will be looking for a job in the MAC.

When your boyfriend or girlfriend starts a sentence with, “Well you know you’re a great person” you know you are in trouble.  Well that is the nicest thing I can say about Mason – he is a great person but he not cut from the head coaching mold.  He is lacking in the personality department and will struggle to recruit given all the difficulties that come with recruiting at an institution like Vanderbilt.  As long as he is at the helm at Vanderbilt the ceiling of that program is a bowl game once or twice every five years.

I’ll be the first to admit I don’t know much about Barry Odom.  He was a tremendous defensive coordinator who has had a rather meteoric rise to the position of head coach in the SEC.  If Missouri is patient he will improve as a head coach but the Tigers will likely be toward the bottom of the SEC East along with Vanderbilt on a consistent basis.

Hugh Freeze is the poster boy for lack of institutional control.  The only control he appears to excerpt is over who drops off the alleged briefcases of cash to 5-star recruits.  The only reason he seems to get some slack from people is because of how much they love watching Sandra Bullock in walk onto the field in a tight white skirt in “The Blind Side”.  He is walking probation the moment he steps on campus for a college football program.  I believe the words that come out of his mouth as much as I believe Nancy Pelosi.