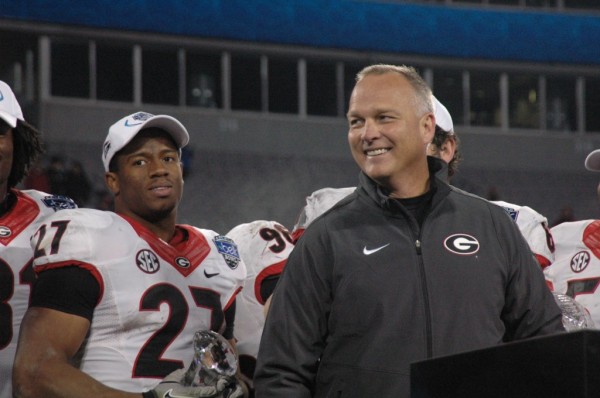 The psyche of the Bulldog Nation needed this win in the Belk Bowl in Charlotte on Tuesday night – a 37-14 Chubb-ing of Louisville led by Bobby “Evel” Petrino and Todd “Towel Boy” Grantham.  The Dawgs’ running game continued to chip away at the Louisville front 7 until it crumbled, and 2015 Heisman candidate Nick Chubb and the offensive line pounded away at Grantham’s defense until they relented.  Jeremy Pruitt had a great defensive plan to yield yardage but eventually put the clamps down on Petrino’s offense by causing turnovers and playing sound 3rd down defense.  Coach Richt put the hammer down and never relented especially late in the 4th quarter as he sent Chubb out one last time to break the Louisville defense.  Let’s get to the rundown.

The Running Game – Offense and Defense

This outcome of this game came down to the Dawgs’ ability to run the ball and stop the run.  On offense, Georgia ground out 313 yards on 52 carries against a rushing defense that was one of the top 10 statistically in the country.  Nick Chubb led the way with the 2nd highest total of rushing yards in a single game in Georgia history with 266 yards and 2 TDs including an 82-yard run that electrified the Georgia crowd.  Sony Michel added another 33 yards with a TD.  The defense did their best Junkyard Dawgs’ impression by limiting the Louisville offense to 62 yards on 27 carries including 4 sacks for 36 yards.  Once Pruitt’s front 7 took away any consistency in the running game, the game began to get out of hand as the Georgia defense continued to wrap itself around the Louisville offense to suffocate it.

5 of Georgia top 6 tacklers came from starters in the front 7 led freshman sensation Lorenzo Carter’s 8 tackles and his game-ending sack when Evel was trying to make the score look respectable at the end.  Seniors Ramik Wilson and Ray Drew were solid with 7 tackles each and a sack each.  Jordan Jenkins had another solid night as he consistently disrupted the Louisville offense, and senior Mike Thornton possibly saved his best game for his last with 4 tackles and a half-sack with Jenkins.

My God! The Freshmen!

Numerous freshmen contributed to the victory on Tuesday night and really gave the Bulldog Nation a nice glass of red Kool-Aid in preparation for 2015.

On offense, Chubb deservedly got all of the accolades for his record-setting performance on Tuesday night and a season in which his rushing total is only surpassed by the 3 seasons of the greatest college player of all time, Herschel Walker.    Sony Michel appears to be Todd Gurley’s successor as kick-off returner with his called-back kickoff return for a TD and had a big play off a screen pass to change field position.  While the stat sheet wasn’t eye-popping by any stretch, Brice Ramsey led the team after Mason’s injury and got valuable experience entering the spring competition for the starting job.  Jeb Blazevich had a couple of catches in his Charlotte homecoming.  Greg Pyke had another great game as a young guard that will be looked at as an all-SEC candidate entering next fall.

On defense, Dominick Sanders was one of the stars of the defense with his 2 interceptions and showed his big-play capabilities throughout the season.  Lorenzo Carter grew up the 2nd half of the season and became a disruptive force culminating in his performance against Louisville.  Aaron Davis led the secondary with 7 tackles and continued to fight as Petrino tried to pick on him with their all-world wide receiver Parker.  Malkom Parrish appears to have locked down one of the starting corner positions entering the spring and had a solid game.  Tramel Terry is becoming a big-time special teams player and will likely challenge at safety/star in the spring.

After the ‘Ville’s unsuccessful fake punt, it seemed Lilly and Richt had a play call in mind and stayed with it although Brice Ramsey was entering the game.  Richt said Ramsey was completely cold entering the game, so it was clear they had not considered that when they called a deep pass to Malcolm Mitchell on the 1st play of the series.  The ball was intercepted after being underthrown although Mitchell was open on the play.  It would have been a great call if Mason were in or if Ramsey had been ready, but it was a potential momentum killer.  Yes, that’s picky.

Other than the sacks, the defense had no other tackles for loss.  While the stat sheet shows we were solid against the run, we weren’t as disruptive in the running game as we need to be to become the type of defense Pruitt would like to see.  I imagine this will be a focus for Pruitt and Tracy Rocker in the offseason in preparation for 2015.

37 points and 505 yards of total offense gives a grade with an A against a solid defense every time.  The two turnovers and the couple of dropped interceptions bring the grade down a little.  3rd and Grantham was in full force on Tuesday night as the Georgia offense converted 12 of 18 3rd down attempts.  I guess Towel Boy needs to keep his Mickey Mouse offense comments to himself from now on.

Once Mason went out, I was afraid of the defense being left on the field most of the 2nd half while the offense would potentially struggle similar to the Cocktail Party after Boss Andrews went out.  Pruitt’s troops continued to stand tall and make plays.  The refusal to relent at the end of the game while we were in the prevent was a big beacon of hope for next season.  Let’s get this defensive staff locked up now, McGarity.

With the exception of the play call described above, the staff did a great job of delivering the win.  In particular, I wanted to call out the coaches for not holding the players back before the game as they called out the Cardinals from just outside the tunnel.  Lorenzo Carter stepped out and had to be forced back by an official.  At that point, I knew we were taking the game seriously.  Excellent job given all of the distractions during the preparation for the game and the injuries suffered during the game.

The team is likely to finish in the top 10 in the rankings and will probably end the season as the 2nd highest rated SEC team behind Alabama.  Todd Gurley along with a number of seniors from the Dream Team recruiting class will be heading to the NFL or wherever their lives take them.  Godspeed to all of them and thank you for the contributions you made to the success of the Georgia program.  The Dawgs will be playing a new starting QB for the 2nd year in a row.  If Ramsey, Park or Bauta can grow up this off-season, this offense has great potential with an offensive line returning 4 starters and numerous skilled position players including Heisman candidate Nick Chubb.  The defense loses a number of seniors in the front 7, but good players appear to be waiting their turn along with a defense-heavy, highly touted recruiting class.  Entering the season, the secondary was the team’s question mark and became a strength to build on by the end of the season.  Both kicking specialists return for their senior seasons including all-SEC candidate Marshall Morgan at kicker and Isaiah McKenzie as punt returner.  The out of conference schedule softens as Clemson leaves the schedule, but the conference schedule toughens with a visit to Sanford from Alabama.  If the QB situation stabilizes, this team will be in the hunt for the SEC championship and, therefore, the national play-off conversation.  Given everything, I lean toward 10-2 right now, but I wouldn’t be surprised to see this team run the table in the regular season and play either Alabama in a rematch or the LSU Bayou Bengal Tigers in a national quarterfinal in the SEC championship game.

That’s what I think.  I would love to hear your thoughts in the comments below.