Han Vance on Georgia football: Fan Richard Hilley first went to Athens for school fall of 1993. He’s a 6th-generation Bulldog and grew up in Sandy Springs, attending Georgia games “since I was born,” he said. Continuing, “I was six in 1981, it was Georgia and Pitt and I cried. …We’d already lost to Clemson. I wouldn’t get out of my seat after the game.”

Glory, glory Georgia is 9-1 again, old rivals folding to our considerable might, last night. D’Andre Swift had a couple hundred yards of total offense as Aubie was shown the gate for their 11th loss to Georgia over 14 tries. 1981 was actually the last time – other than last year – that the football program stood at 9-1 (they were 10-0 in 1980 and 1982). Dropping a late heartbreaker on a Dan Marino bomb, I recall being bummed about that loss myself, watching on TV in Marietta as an 11-year-old.

Good to have good old friends, good to have Georgia people in my life. 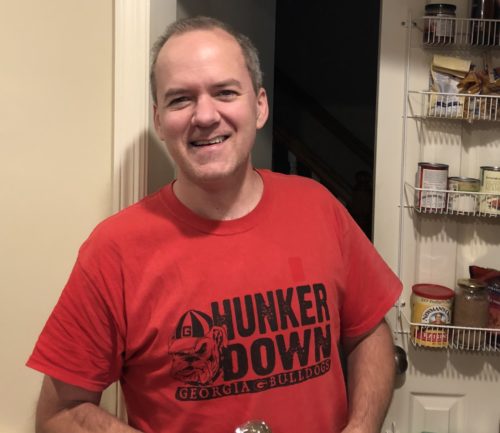 When we’re in town now, Hilley and I watch games together at my townhouse in Historic Druid Hills of Atlanta and have for half a decade. In Georgia fan terms, he came to understand me better than anybody other than maybe my brother Johnny who went to UGA with me, or my dearly departed friend Mark Johnson who I had my season tickets with, rest in peace. Hilley has become essentially a member of the family over the years, usually sleeping on the couch and hanging in for a.m. coffee and highlights.

He had classes in the same building as former offensive coordinator Mike Bobo and head coach Kirby Smart, when they played for Georgia. “My sophomore year, I was on the same schedule as those guys. Half the football team was in there.” He has been a huge Kirby supporter since day one of the new era.

Richard and I attended the Liberty Bowl in Memphis together in Kirby’s first year as head coach, partying epically with Merv Waldrop, Travis Carter,  Jerad Mabon and Josh Dickey, as covered in Bulldawg Illustrated {Link: https://bulldawgillustrated.com/sports/uga-football-2/football-culture-memphis/

‎This season, I tailgated and attended the Georgia-Tennessee game in Athens with Richard and his mother Cindy and sister Mary, who both went to Georgia. We all went to Georgia.

People of the Program is a recurring series by Han Vance profiling folks with myriad types of ties to the University of Georgia Bulldogs sporting programs, including fans, former players and the like.