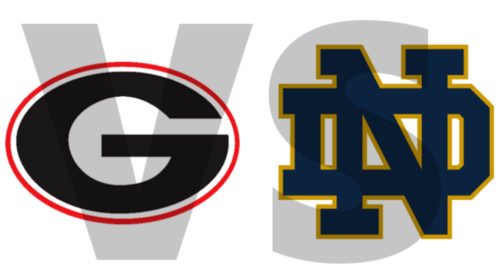 The Bulldawg Illustrated staff are back in week two with their predictions for the Bulldogs vs. Fighting Irish as No. 15 Georgia faces off against No. 24 Notre Dame in South Bend, Indiana in these two teams’ second-ever meeting.

Irish get an early lead courtesy of a couple Dawgs’ turnovers and then hold on grinding out the clock behind their NFL lineman.

Irish will be pumped to climb in the national rankings after last year’s dismal 4-8 season but the Bulldogs’ defense and big games from Chubb and Michel, as well as a steady performance from freshman quarterback Fromm, will enable Kirby’s team to get out of South Bend with a 4-point victory in a thriller.

I’m going with the good guys even though my confidence factor is not high. A new offensive line and a new quarterback on the road against a team that wants to prove that last season was an anomaly. It is not an ideal situation, but I think the Dawgs will power through in the fourth quarter.

The game will most likely come down to which team can run the ball on the other’s defense and special teams, and if the game does indeed come down to that, I like Georgia’s defensive front seven, Bulldog running backs Nick Chubb, Sony Michel, and company along with place kicker Rodrigo Blankenship over Irish kicker Justin Yoon.

Defense and special teams keeps Georgia in the game and the offense does just enough to get the victory.

Sony Michel has a breakout game and our defense holds them low.

I think that the Georgia D-line will be the key to this game. The matchup is basically strength on strength and our front seven is just a bit better than they expect.

I think the defense sticks to their guns and makes huge stops. Fromm and company finally put some points up on a strong team

This game could become a shootout but the Bulldogs defense will be able to make a few plays to get the offense set up with good field position. Rodrigo Blankenship will have a pair of field goals and that will be the difference in the game. I think the Bulldogs have the advantage in the running game and Chubb and Michel will both have solid days, which will lead the team to victory.