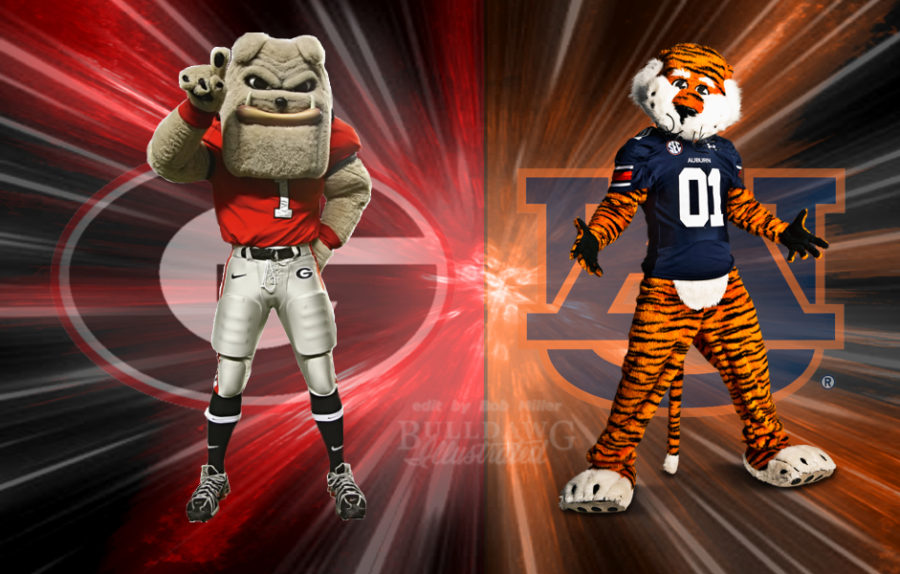 The Georgia Bulldogs look to avenge their lone loss on the season as they will face the second-ranked Auburn Tigers in the 2017 SEC championship and the BI staff give their predictions for the game.

It would be a complete shock if Part II of Georgia-Auburn doesn’t look and end differently. On the Plains, our men in Red and Black completely lost their focus and the game got away from them. It was an ugly loss. Look for our tight ends to loosen up Auburn’s D to be followed by a balanced run and passing attack. And on defense, sealing the edges is the name of the game. Our team and the Bulldog Nation advances to the playoff with a 27-17 revenge at the Benz.

It will be so tough, so physical, with the stakes sky high. No school has taken more from Georgia than Auburn. The Dawgs can re-write history this time.

Auburn played lights out in the first meeting and Georgia, well, played like it was in the dark all four quarters. Now, as the Tigers cross the Alabama state line into Georgia this weekend, they will encounter a different Bulldogs team, one that will be highly motivated and pumped to avenge the 40-17 debacle at Jordan-Hare. With the Bulldawg Nation fandom rocking Mercedes-Benz, Georgia extracts revenge from the Tigers’ hide, captures its first SEC title since 2005 and surges into the College Football Playoffs!

Can a team that got whipped by the Tigers 40-17 a little less than a month ago avenge that 28-point loss? You bet your red and black bootstraps they can. The game is away from Jordan-Hare on a neutral field, and I know they can play better. Heck. I’ve seen Georgia play better than they did back on Nov. 11th. But it will not be for the faint of heart, as the Bulldogs will edge out the Tigers in an SEC battle royale.

While I do not see another bad loss like the recent meltdown on the Plains, Georgia faces an uphill battle against a soaring Auburn team. Maybe the Tigers are reading their clippings and basking in the glow of their victory over Bama and not concentrating on the Bulldogs. Maybe injuries to Auburn’s running backs will shift the tide in favor of the Dawgs. However, the last contest was lost in the trenches and nothing has changed there. Georgia will move on to a quality bowl after dropping a hard-fought championship game 24-14. Of course, I’m often wrong.

The 2017 Redemption Tour continues for the UGA Seniors. On Saturday the Dawgs get the opportunity to finish the drill and with a victory over the Auburn Tigers. Coach Smart will have the Dawgs playing a loose, confident, attacking brand of football Saturday evening. Chubb and Michel run like they are on a mission and Mecole Hardman is the X-Factor on offense while Roquan Smith will lead the wrecking crew on defense. Auburn is a fantastic football team and won’t make things easy for the Dawgs but this season has had a special feeling since the victory at Touchdown Jesus. Dawgs attack the day on Saturday and pull off a hard-fought victory.

Georgia wins the rematch over an Auburn team happy to be there, with their two big wins coming at home. Chubb and Sony came this far and won’t be denied. Nauta has his only big game of the year, softening the box.

I love our chances. I’m cautiously optimistic. The neutral site is key. In fact, I think there will actually be more Dawg fans there than Tigers/Eagles/Plainsmen. It’s going to be a classic SEC defensive battle, but once our offense gets rolling, Auburn’s defense will wear down, and Nick and Sony will break a couple big ones.

My heart says one thing and my gut says another. And I just may have to go with my heart on this one. Georgia’s done some impressive things this season, and I fully expect something impressive on Saturday. Auburn’s had two once in a lifetime wins in the last three weeks taking down two No. 1 teams, however, its luck runs out on Saturday.

I cannot quite explain the optimism that I have with the Bulldogs earning the victory, but I have to think that this game will be much closer than the last meeting. The Bulldogs played well early, especially on the defensive side of the ball as they did a great job of keeping Auburn out of the end zone. Georgia had a lot of uncommon mistakes and I believe they clear those up in all facets of the game. I like what I have seen from the defense in practice leading up to this game and I believe that they will have an easier day containing a banged up Tigers’ backfield. Finally, I think we see a more balanced rushing and passing attack, but the Bulldogs will rely early on the pass to open up the run. This game should be entertaining until the very end.

The Bulldawg Illustrated staff seems confident in the Bulldogs yet again, but what do you think? Please put your prediction in the comments section.