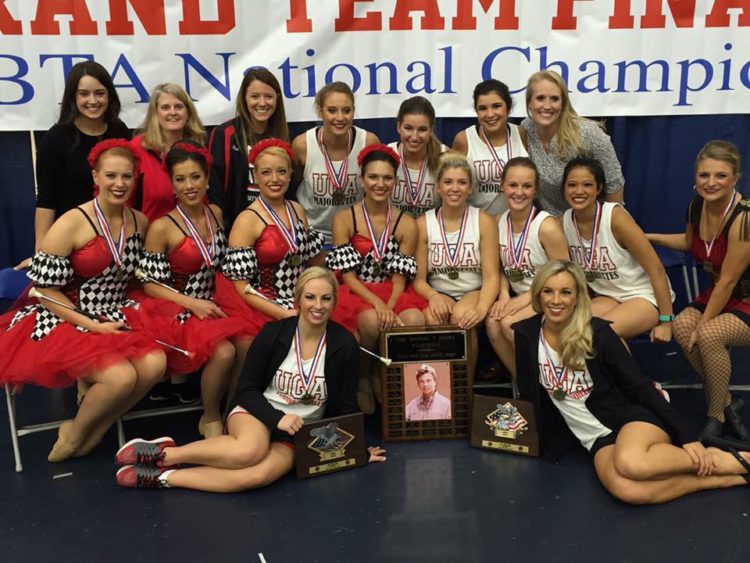 The UGA twirlers competed in two team events; a halftime routine, which is judged based on artistry and a dance-twirl routine, which emphasizes difficulty and intricacy of tricks. With these routines, the UGA twirlers are the 2016 Open Collegiate Half-Time Show Twirl Team Champion and “WOW” award recipients for best choreography among collegiate teams. UGA was also awarded the prestigious Michael Moore Choreography Memorial for outstanding choreography among all competition routines in the senior age division – the first time this award has ever gone to a collegiate team.

The UGA twirlers also placed first and third runner-up in large and small divisions of the senior dance twirl competition. For this event the majorettes competed against twirling teams from across the nation whose main focus is competition twirling. It is very significant for a collegiate team to even place in this event, since college twirlers are constantly choreographing new shows and performing all year long while competition teams work on only one routine at a time.

“The amount of practice these young women put into their routines over the past few months exemplify their dedication and commitment to excellence. Not only does UGA have the top collegiate twirling team in the nation but also the top feature twirlers, with Jameson and Miranda being recognized for their incredible performances,” said Clark.

Kenerly and Williams competed against more than 70 other college twirlers from across the nation for their titles.

“This has been a dream for us since we started twirling as little girls,” said longtime friends Kenerly and Williams. “We couldn’t be more thrilled to bring the wins home to UGA.”

Several of the UGA twirlers also competed in individual events at the national championship, all resulting in top 10 finishes. Kristina Howell, senior captain of the UGA Majorette line, won the “Team Member of the Year” award for leadership and performance among other competition teams.

“We are very proud of the team for representing the University of Georgia and the Redcoat Marching Band in such a positive light,” said Director of Athletic Bands, Dr. Mike Robinson. “The entire Redcoat family is excited for their success and we look forward to some great performances throughout the season.”

The UGA majorettes and feature twirlers will perform with the Redcoat Marching Band at the first game of the season, Georgia vs. North Carolina, on Saturday, September 3 in the Georgia Dome.

About the UGA Auxiliaries

The 2015-2016 Auxiliary unit consists of 18 Georgettes, 10 Majorettes, 3 Feature Twirlers, and 28 Flag Line members. The 59 young women who make up this outstanding program are dedicated to continuing a tradition of excellence that has always defined UGA Auxiliaries. The Redcoat Marching Band was established in 1905 and auxiliaries were added in the 1950’s. Phyllis Dancz, who became the first Director of Auxiliaries, formed the Georgettes dance line in 1959. The Flag Line was formed in 1974 to add more color and motion to the field. Today the Feature Twirlers, Majorettes, Georgettes, and Flag Line comprise the UGA Auxiliaries. The UGA Majorettes twirl together as a line and have team choreography, while the Feature Twirlers perform solo routines. Each auxiliary unit performs during pre-game and halftime with the band at home football games in front of 92,746 Bulldog fans in Sanford Stadium. In addition, the auxiliaries travel to most away games with the full band, including the annual Georgia vs. Florida game held in Jacksonville, FL as well as bowl games. The UGA Auxiliaries also perform at venues for pep rallies and community events. On and off the field, the young women who make up the UGA Auxiliaries are representatives of true bulldog pride.