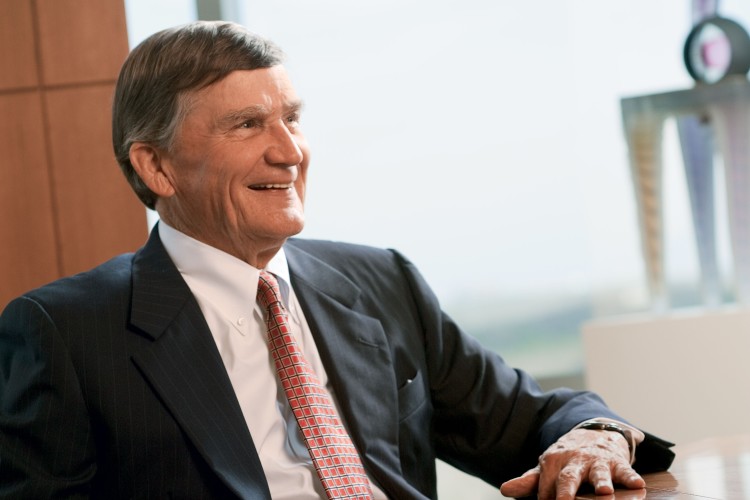 A gift from University of Georgia swimming letterman and Atlanta philanthropist Tom Cousins has permanently endowed the UGA head baseball coaching position according to a joint announcement by UGA J. Reid Parker Director of Athletics Greg McGarity and the Cousins family.


The position bears the name of Cousins¹ father, Ike, a three-sport athlete, including baseball, at Oglethorpe University in Atlanta. It is the first endowed head coaching position at UGA and will be known as the Ike Cousins Head Baseball Coach. The Director of Athletics position was endowed in 2013 by John and Kay Parker of Athens.


We are deeply appreciative of this wonderful gift from one of our most loyal and accomplished lettermen and UGA alumni,” said McGarity. “This endowment is a unique way of honoring Tom¹s father and paying tribute to his athletic accomplishments while demonstrating Tom’s commitment to the University of Georgia and our athletic program. Tom has been a remarkable advocate for the city of Atlanta not only by an interest in athletics but also in the cultural and social evelopment of his hometown. From a personal standpoint, I cherish Tom¹s friendship and am fortunate to consider him as a mentor. He is a treasure for the University of Georgia and the city of Atlanta.”


Tom Cousins is the Founder and Chairman of Cousins Properties Incorporated, a Real Estate Investment Trust (REIT). The company was founded in 1958 with
a belief that meeting a client¹s expectations by delivering a quality product, on time and on budget, should be the driving force behind his firm’s performance. This pursuit of excellence is an operating imperative and permeates the Cousins culture to this day.


He has a long-standing reputation for supporting numerous projects in his community. Cousins built the Omni, Atlanta’s first sports arena. He lured pro basketball and hockey to the South. He and former Governor Carl Sanders bought the St. Louis Hawks on May 2, 1968, bringing the NBA to the Deep South for the first time. In 1972 he bought an expansion franchise from the National Hockey League, naming the team the Flames. Cousins also donated the land for the Georgia World Congress Center.


A member of Oglethorpe’s eighth graduating class, Ike Cousins shined in his athletic endeavors while in college. A three-sport athlete, Cousins played football, baseball, and was a member of Oglethorpe’s first basketball team. He lettered in all three sports and excelled at the center position for the two-time SIAA champion football team and was credited with saving the 1926 season after the team lost its starting center.


During his time with the team in 1925 and 1926, Oglethorpe was able to defeat Clemson, Georgia Tech, Wake Forest, Florida and the University of Georgia.


Outside of sports, Ike was an active member on the Oglethorpe campus. He was a member of Alpha Lambda Tau fraternity, the Tech Club and the “O” club. He graduated from the School of Science in Oglethorpe’s eighth commencement class alongside seven classmates.


A gifted baseball player, Cousins was described as “one of the most natural hitters on the team,” and was approached by a major league team who hoped to add Cousins to its roster. He passed, though, choosing marriage with his wife Lillian over the prospects of a professional baseball career. The couple had four children and eventually 13 grandchildren. He was a pioneer in business after changing career paths from a medical route, eventually starting a real estate company in Atlanta with his son, Tom.


In 1982, Ike was named to the Oglethorpe University Athletic Hall of Fame.


Tom Cousins believed one of his (Tom¹s) most important projects was the development of historic East Lake Golf Club into one of the most attractive golf layouts in the country that exposes minority children in the area to the game of golf. But this project supports more than golf. Cousins believe that with the right combination of mixed-income housing and infrastructure, educational opportunities from cradle-to-college and community wellness, East Lake could be redeveloped as a safe and vibrant place to live. Today, East Lake and thirteen other cities (with 40 more in the pipeline) across the nation are thriving like never before.


During the past decade, Cousins Properties Inc. has expanded geographically into other markets such as Charlotte, Washington D.C., San Francisco, Los Angeles, San Diego, Dallas and Austin, while maintaining a leading position in the Atlanta market.


Cousins is a native Georgian. He holds a Bachelor¹s degree from the University of Georgia where he was a member of the Bulldog swimming and diving team. He served in the Air Force during the Korean conflict from 1952 to 1954. His lifetime hobbies include flying planes and playing golf. He is equally passionate about corporate leadership and stewardship.


Cousins serves on the board of the Georgia Research Alliance and is a Director Emeritus of Total Systems Services, Inc. as well as a Trustee Emeritus of Emory University. He previously served on the board of NationsBank (now Bank of America), First Union and Shaw Industries. He has served as President of the High Museum of Art in Atlanta and is a member of its Board of Trustees. He has chaired the University of Georgia Foundation and has been awarded an honorary degree by the University. He also currently serves as a Trustee to the CF Foundation.


Cousins was a Bulldog letterman in swimming in 1950 and ¹51 and was a member of Georgia¹s 400-yard freestyle relay team that won the 1950 SEC championship. He also set a Georgia school record in the 1,500-yard freestyle that same year.


Cousins his wife, Ann, have two grown children and four grandchildren. Throughout their lives they have enjoyed participating in Atlanta¹s many civic and artistic causes as well as spending time with their family and traveling for pleasure.