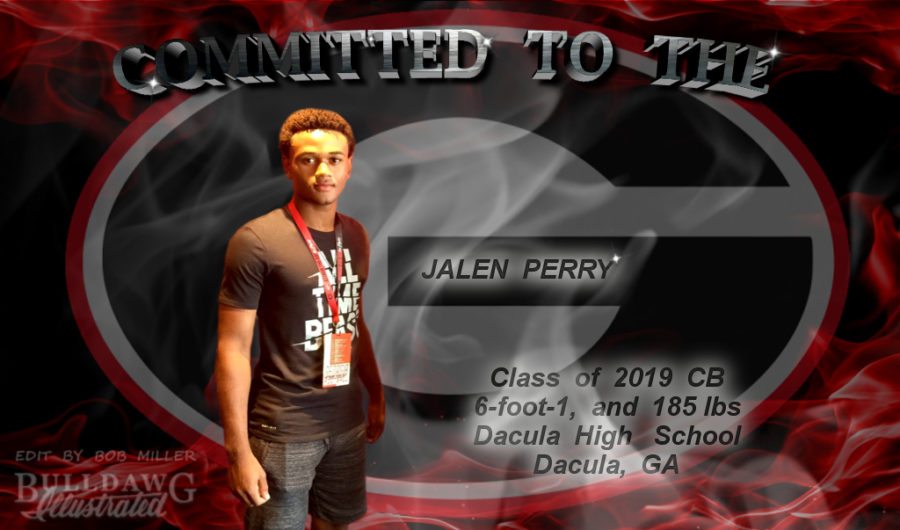 Dacula, GA class of 2019 defensive back Jalen Perry announced his decision to commit to the University of Georgia shortly before 9:00 a.m. on Monday morning.

I’M ALL DAWG!!! Excited to announce that I am officially committed to The University Of Georgia🐶🔴⚫️ #GoDawgs #CommitToTheG pic.twitter.com/6Nqc2LZBu3

Perry is a 6 foot 1 and 185 lbs junior out of Dacula High School. He is rated the No. 14 CB and a four-star prospect by 247Sports’ composite ranking system. ESPN, Rivals and Scout also rate Perry as a four-star prospect at CB. He has over 16 scholarship offers and chose to commit to the Bulldogs over programs like Alabama, Clemson, Ohio State, and South Carolina. With Perry’s announcement, Georgia now has 7 verbal commitments and the No. 2 recruiting class in the country for the 2019.


Georgia is getting a tall, rangy, and athletic defensive back in Jalen Perry, who also plays at wide receiver and returns kicks and punts for the Falcons as well as plays varsity basketball. From his time on the basketball court, those skill are apparent when you watch him on the gridiron as he does a good job of attacking the ball in the air at it’s highest point. He does a good job of reading the play and reacting. Very good hands for a CB which enables him to make interceptions that other DBs might drop.