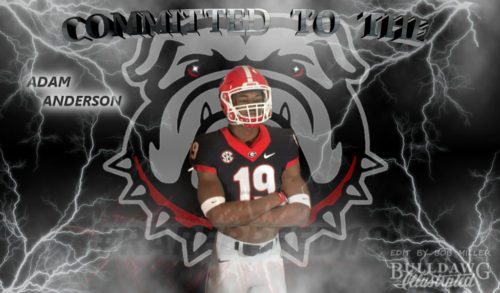 The No. 2 outside linebacker in the 2018 recruiting class out of Rome High School, Adam Anderson, has announced his decision to commit to UGA.

Anderson announced his decision shortly before 8:00 p.m. ET. His recruitment has been a roller coaster ride as this makes the second time that he has committed to the Bulldogs. He had committed to Georgia last year on August 5th, but then de-committed back in the spring on April 22nd a day after taking an unofficial visit to LSU. Anderson then committed to the Tigers the same day but less than three months later would again reopen up his recruitment and de-committed from LSU. What followed for Anderson was a flurry of visits at the end of July, including one to UGA back on July 21st after Tennessee on July 20th followed by Alabama on July 22nd, then Clemson on the 24th, and Auburn on July 30th. The Rome LB/DE was back in Athens for the Dogs’ game against Mississippi State on Sept. 23rd.


His wild recruiting ride is not surprising given the 6 foot 4.5, and 214 lbs Adam Anderson’s potential. 247Sports rates him as a four-star prospect and the No. 2 OLB per their composite ranking system. Scout also rates Anderson as a four-star prospect with Scout having him as the No. 3 OLB while ESPN and Rivals rate him as the No. 7 and No. 4 DE and a four-star prospect. While Anderson shined in the camps, he has been even more impressive with pads on and when the lights come on, on Friday nights. In seven games, Anderson has tallied 40 tackles, 17 tackles for loss, nine sacks, two forced fumbles and two pass breakups from his defensive end position for the Wolves, and he is a candidate for the Player of the Year Award in Georgia presented by the Touchdown Club of Atlanta.


While he played a good bit at DE for the Wolves in high school, look for him to play at outside linebacker at the collegiate level; although, in Georgia’s defensive scheme it is likely we could also see him rush the passer from the rush end or WDE spot as well. Anderson is very gifted athletically, and he uses that athleticism to full affect on the gridiron. He is very good at disrupting the flow of play when he is given the opportunity to pin his ears back and get after it and is very explosive off the snap of the ball. He uses his hands well to shed blockers and can chase down plays from the backside with his 4.62 speed.


Anderson makes the 17th commitment for the Georgia Bulldogs’ 2018 recruiting class, which could shape up to be one of the tops in the SEC and in the country when it is all said and done come National Signing Day in February.