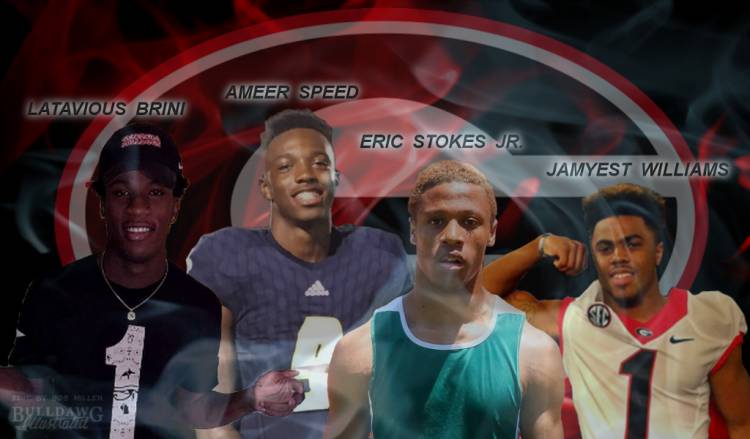 Latavious Brini – 2017 CB
40% USF, 30% VT, 10% Miami, 10% Oregon, 10% UGA. Brini is set to announce his decision on Feb. 1st, and he is one of three cornerbacks that will take an official to UGA on January 20th. The one-time Bulldog commit will also visit VT and Oregon this month, and he was a Hokie lean but Coach Strong and USF have made a big push here.

Markaviest Bryant – 2017 WDE
80% UGA, but Auburn has made a late push here for the “Big Cat;” so, my confidence has dropped from 95% to 80%. I still think UGA is the favorite here. He could announce anytime between now and NSD. He is visiting UGA this weekend, and I have him on commitment watch.

Nico Collins – 2017 WR
40% Michigan, 40% UGA, 20% Alabama. My confidence that Collins could pick the Bulldogs has gone from 10% up to 40% in just about a month. Georgia is doing an outstanding job here recruiting the phenomenal wideout, but Michigan was the favorite. Not anymore. He will wait till Feb. 1st to announce his decision on NSD. Good news is he has scheduled an official visit to UGA the weekend before on January 28th; so, this is one to definitely keep your eye on.

Tedarrell Slaton – 2017 OL/DL
70% Florida, 20% UGA, 10% Ole Miss. Slayton takes an official visit to Florida on January 20th and to Ole Miss on the 27th. If Georgia can get “TD” to visit, which will depend on what happens with Florida’s visit, the Bulldogs could have a shot at the big man out of American Heritage.

Aubrey Solomon – 2017 DT
Was a Michigan-Georgia battle and now it appears to be an Alabama-Michigan-Georgia battle, but it is anybody guess where he ends up or when he announces his decision. As expected he did not announce his decision at the US Army All-American game on January 7th, and he originally was going to wait till NSD or possibly afterward. However, that has changed and he is likely to announced before the end of January. His announcement will be carried via ESPN from Lee Co. High School.

Ameer Speed – 2017 CB
70% Virginia Tech, 15% UNC, 15% UGA. He is planning to announce on NSD on Feb. 1st between Georgia, Michigan State, North Carolina, Oregon, and Virgina Tech. Speed has scheduled a visit to UGA on January 20th. The Bulldogs are looking to land another CB in this class, but VT is a strong favorite here.

Eric Stokes Jr. – 2017 CB
95% sure he picks UGA if there is room, but I’m 50/50 on if there is an open spot for him at the moment. He has scheduled an official visit to UGA on January 20th along with a couple of other cornerbacks; so, it is possible that the coaching staff takes whoever commits first between Brini, Stokes, and Speed.

Tyler Taylor – 2017 ILB
30% UGA, 30% Oklahoma, 30% Auburn, 10% LSU. He could announce anytime between now and NSD. At one time, Taylor was favored to Georgia, but he is likely an odd man out due to who the Bulldogs have committed and who they are focusing on to close out the class with.

Leonard Warner – 2017 ILB
95% UGA. He could wait till NSD to announce his decision, but I don’t think he will. However, the longer he waits, the less likely there will be a spot for him at Georgia as numbers are getting tighter and tighter the closer we get to NSD. If he doesn’t commit to UGA or there are not any spots left, he could look to head out west to Stanford.

Tamorrion Terry – 2017 WR, Committed to FSU. Question is will he qualify academically. If not, he is likely headed to JUCO or Prep. 0% flip potential.

Jamyest Williams – 2017 CB, committed to South Carolina. Flip potential to UGA was 25% and now is up to 50%. He will take a visit to Athens this weekend.