The Georgia men’s golf team did not look like the No. 5 team in the nation on the Querencia Golf Club Course on Tuesday as the Bulldogs shot a 7-over par 291 in the third and final round of the Querencia Cabo Collegiate tournament to finish 13th out of the 15 team field team.


Senior Greyson Sigg led the Bulldogs on Tuesday with a 2-under 69, while freshman Spencer Ralston and sophomore Tye Waller each added a 1-over 72. Senior Jaime Lopez Rivarola and sophomore Jack Larkin Jr. each recorded a 7-over 78, with only one counting.


Ralston was the low Bulldog for the tournament, recording a three-round total of even-par 213. He finished tied for 25th place, nine shots back of individual medalist Corey Pereira of Washington. Sigg finished in a tie for 42nd, with a 5-over 218, and Waller was next, tied for 50th at 7-over 220. Rivarola and Larkin followed, in 63rd and tied for 65th, respectively.


Georgia will be back in action Monday, March 13, when it hosts the Southern Intercollegiate in Athens. 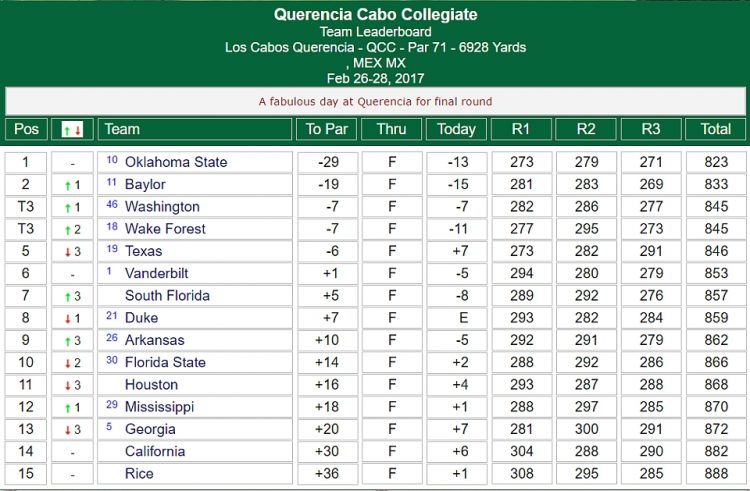