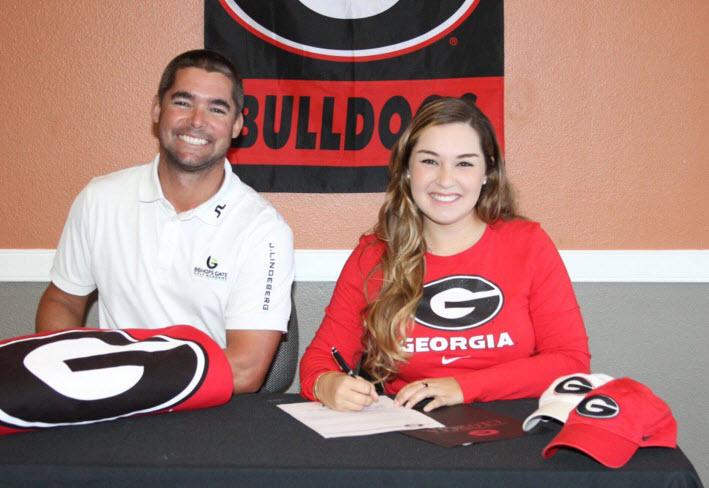 [su_spacer size=”20″] Gaby Coello, a standout junior golfer from Maracay, Venezuela, who currently attends Windermere (Fla.) Preparatory School, has signed a letter-of-intent with the Georgia Bulldogs, head coach Josh Brewer announced on Wednesday.
[su_spacer size=”40″] “Gaby is exactly what we’ve tried to find in the young ladies we recruit,” Brewer said. “She is an excellent student-athlete who lives and breaths the game of golf. She loves it. She wakes up every day wanting to get better and be a part of a program that is trying to be the best in the country. She wants that challenge every day and wants to be a part of what we’re trying to build here at Georgia.”
[su_spacer size=”40″] Coello (pronounced Co-ell-oh) notched five top-10 finishes in 12 national level tournaments in 2015, including runner-up showings at the AJGA Greg Norman Champions Golf Academy Junior and the Florida Junior Tour at Viera East. She also competed in the 2015 U.S. Girls’ Junior Championship, where she tied for 51st in stroke play before falling in the first round of the match play bracket.
[su_spacer size=”40″] “It’s hard to put into words why I chose Georgia,” Coello said. “Georgia was my first visit, and I knew it was the right fit. As soon as I saw everything for the first time, I knew I wanted to be there to spend four years of my life. I’m really happy and really humbled. All the hard work has paid off. I can not wait to be a Dog and get to win a couple of national titles with the team.”
[su_spacer size=”40″] Coello arrived in the U.S. in 2012. She has posted top-10 individual finishes at each of the past four Florida Class A High School Athletic Association State Tournaments. Coello tied for fifth while helping Windermere capture the state team title in 2012 and also has placed third in 2013, eighth in 2014 and third in 2015. She also helped Windermere finish third as a team in both 2013 and 2015.
[su_spacer size=”40″] Georgia wrapped up an extremely successful fall portion of the 2015-16 season ranked No. 4 in the Golfweek/Sagarin Performance Index and No. 8 by Golfstat. The Bulldogs won the Cardinal Kick-off and tied for the team title at the Windy City Collegiate.
[su_spacer size=”40″] Individually, five Bulldogs are currently ranked in the top-100 nationally by both Golfweek and Golfstat. Bailey Tardy is No. 5 by Golfstat and No. 15 by Golfweek, Harang Lee is No. 5 by Golfweek and No. 23 by Golfstat, Jillian Hollis No. 32 by Golfweek and No. 74 by Golfstat, Manuela Carbajo Ré is No. 58 by Golfstat and No. 61 by Golfweek and Rinko Mitsunaga is No. 67 by Golfweek and No. 73 by Golfstat.
[su_spacer size=”60″]