In what promises to be another exciting slate of meets, Georgia will face four of the other five teams from the 2016 Super Six – LSU, Florida, Oklahoma and Alabama – a total of six times.


“For the last few years we’ve definitely played either the toughest or one of the toughest schedules in the country,” said Durante. “I’d have to say that’s probably true again. Just the SEC in general is tough competition. Whether it’s the top-ranked team or the eighth, they’re all great competitors and all have great coaches. We test ourselves in our conference but also see teams like Utah and Oklahoma twice, which will absolutely prepare us to see the best. It’s great to see where we stack up and it’s great to be against the best of the best. We’re excited about our schedule and excited about being at home in Stegeman Coliseum for six regular season meets this year.”


After trips to Baton Rouge (January 6) and Auburn (January 13) to open the season, Georgia will open its home slate with a Martin Luther King, Jr. Day meet against North Carolina State on Monday, Jan. 16 at 2 p.m. The meet is the first of four consecutive home meets, rounded out by conference dates with Arkansas (January 20), Mizzou (January 27) and Kentucky (February 3).


After the extended home stretch, the Gymdogs hit the road once again for the remainder of February, taking on the Gators in Gainesville (February 10), the GymQuarters Invitational, a four-team meet in St. Charles, Missouri against LSU, Oklahoma and Mizzou (February 17) and a meet at defending national champion Oklahoma on Friday, Feb. 24.


Back-to-back home meets against Alabama (March 3) and Utah (March 10) wrap up the regular season before a trip to Jacksonville, Florida for the SEC Championships on Saturday, March 18.


NCAA regionals are slated to take place on Saturday, April 1, and the NCAA Championships will take place in St. Louis on April 14 and 15.


The regular season schedule dates and times are subject to change as the television broadcast schedule has not yet been finalized.


A competitive, exciting home schedule is joined by a strong promotional schedule as well. The meet-by-meet promotions will be scheduled as follows:


Additionally, select meets will feature a new post-meet program that is aimed at empowering young fans and encouraging them to be the best they can be. More details on the new initiative will be available prior to the first edition.


The annual Pink and Green meet to benefit cancer research will be announced at a later time.


Season tickets applications will be mailed to all GEF donors and will be available online on Wednesday, Sept. 28. The cost of the season package will be $50 for adults and $30 for youth younger than 18 years of age. The priority deadline for season tickets will be October 28.


Single meet tickets will go on sale on December 15, and will be available for $10 for adults and $6 for youth.


“Our fans are second to none in their support,” said Durante. “What I love about our community support and our fan support is they don’t only support the Gymdogs but they support what we do within the community, whether it’s the pink and green meet, whether it’s our alumni meet – all of those things that we do in meets to honor and support our community, our fans get behind those as well.”


Stay tuned for a complete TV schedule in the coming days. 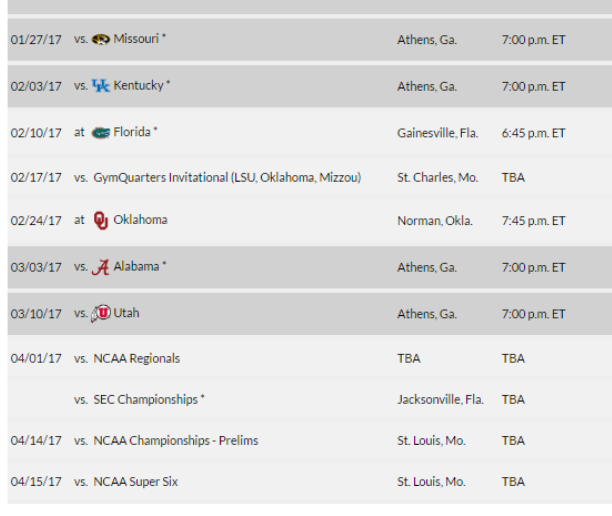