The GymDogs’ schedule includes six home meets and five on the road during the regular season, which begins Friday, Jan. 12, at Alabama.


“We have assembled a schedule that will provide quality and challenging competition for our gymnasts, week in and week out, while also exciting and energizing our fan base,” Kupets Carter said. “We look forward to competing six times in the newly renovated Stegeman Coliseum, where the passion and energy of our fans will give us a true home-arena advantage. By season’s end, as we head into the SECs and NCAAs, there’s no question we will be stronger because we will be battle tested. I am so proud of the efforts our gymnasts have put in thus far and we will continue to work hard to get ready for our season opener in January.”


Also highlighting the season will be a four-way Elevate the Stage podium competition meet Friday, March 2, in Augusta, Ga., against Stanford, Nebraska, and Illinois. The meet will be held at the James Brown Arena.


The final home competition of the season will take place on March 10 against Boise State. The GymDogs will close their regular-season series in Salt Lake City on either March 16 or 17 against Utah before heading to St. Louis, Mo., for the SEC Championships on Saturday, March 24.


NCAA regionals are slated to take place at various sites on Saturday, April 7, while the NCAA Championships will take place in St. Louis on April 20 and 21.


The regular-season schedule dates and times are subject to change as the television broadcast schedule has not yet been finalized. 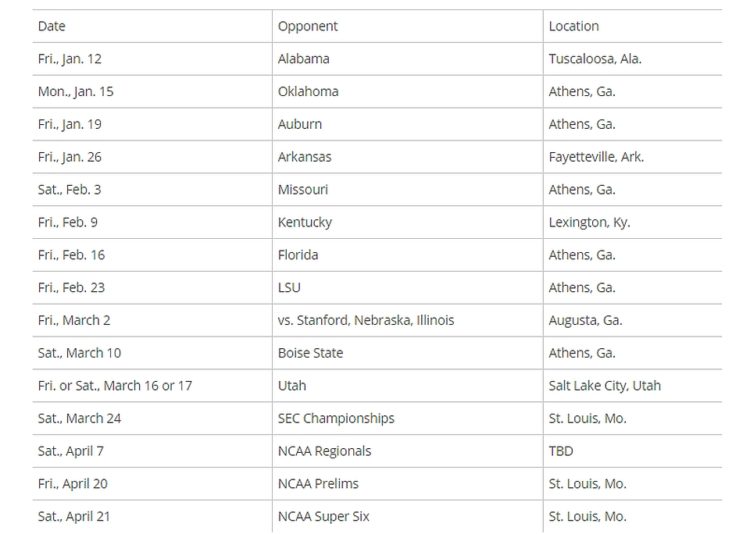