The sixteenth-ranked Georgia softball team made it nine wins in a row on Friday defeating Mercer and Ohio State on day one of the UCF Wilson/DeMarini Tournament. The wins mark the Lady Diamond Dogs 20th and 21st of the season and push their record to 21-3 on the year.

The Bulldogs took down the Bears 12-3 before closing out Friday with a 9-4 victory against the Buckeyes.


The Georgia bats led the way against Mercer, recording 14 hits, including Sydni Emanuel’s team-high three. In the circle, Brittany Gray (14-1) notched the win, tossing four frames with two hits and one run allowed. Kylie Bass finished the game for her first save of the year, as the duo combined for seven strikeouts.


Ahead 4-3 after five innings played, Georgia broke away late against Mercer, scoring eight of its 12 runs in the final two frames. During the final innings, Georgia used six hits, including a triple from Brea Dickey, while capitalizing on two errors to seal game one’s win.


CLICK HERE for the box score and final results from the Georgia softball team’s game versus Mercer.


Against Ohio State, Georgia jumped out to a 3-1 lead after three played before opening it up in the fourth to 6-1. In that inning, Georgia loaded the bases to start things off, setting up a two-RBI single from S. Emanuel. Kendall Burton followed with a sacrifice fly for the final run.


The Buckeyes closed the gap in the fifth inning with a three-run home run, but Georgia immediately responded with three runs of its own in the bottom half to go back up 9-4 for good.


Play in Orlando continues for Georgia on Saturday with back-to-back games against Delaware State and host UCF beginning at 12:30 p.m. ET. 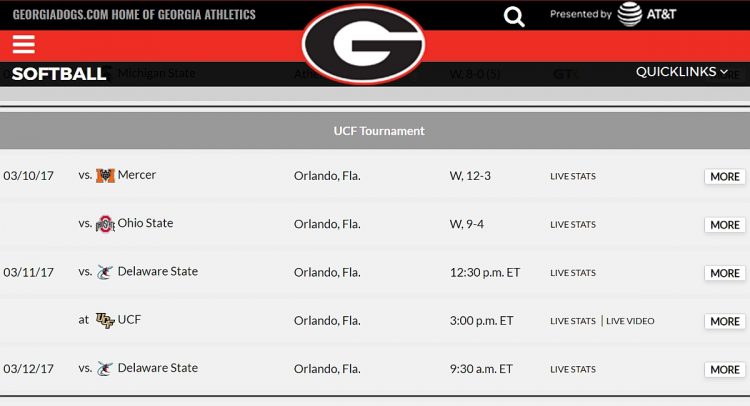