The Georgia men’s and women’s teams finished competition on Saturday in Nashville at the 2017 SEC Indoor Track & Field Championships, and a number of Bulldogs not only brought home medals but set some records in the process.


Georgia added four more league titles to its two from Friday. The Bulldogs also saw two school records (women’s triple jump, men’s distance medley relay) and facility, meet, collegiate and American records in the triple jump go down in the meet’s second and final day. The Georgia women scored 64 points for fourth place while the Arkansas women tallied 106.5 to capture the team title. The Bulldog men finished with 67 points to take sixth and the Razorbacks completed the sweep with 98 points. 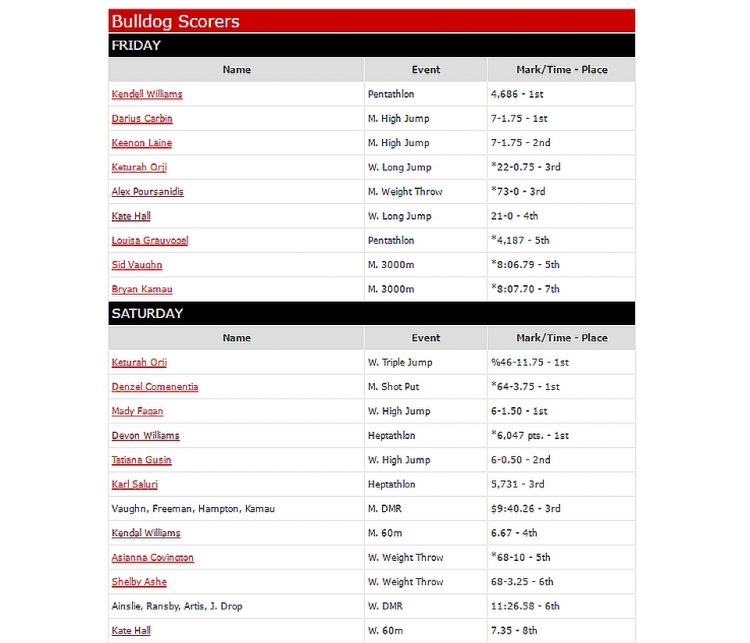 “I think our teams did a great job and I am proud of the points we scored in the toughest conference in the country,” said Bulldog head coach Petros Kyprianou. “We are poised to score many of the same points at the NCAA meet if we can maximize our potential. We made history in several events after showing up and fighting a good fight. We had too many scorers to talk about everyone, but our highlight was Keturah Orji setting an American and collegiate record in the triple jump with a dominant performance. Denzel Comenentia, Devon Williams, Mady Fagan, Tatiana Gusin, Kendal Williams, Kate Hall, our weight throwers and the guys in the (distance medley relay) were some of the Bulldogs who had great moments for our teams this weekend.”


On Orji’s second attempt Saturday, she perfectly matched her record-breaking mark. In fact, three of her six jumps took over the top three spots on the collegiate all-time top-10 list and she now owns five total marks on the list. Orji has won all five of her SEC titles in a row and the last three NCAA championships while also taking fourth at the 2016 Olympics over the summer.


Junior Mady Fagan extended her SEC win streak to two after capturing the high jump title by matching a facility record of 6-1.50. Senior Tatiana Gusin also cleared 6-0.50 on her second attempt giving the same school the first and second-place finishers in both high jumps for the first time in SEC history. Darius Carbin and Keenon Laine, in that order, finished first and second in the men’s high jump.


Fagan, a native of Los Gatos, Calif., was perfect on her first three attempts, including at 6-0.50, and then avoided the bar on her second try at 6-1.50 to top her teammate. After taking second at the 2016 SEC indoor meet, Fagan has now won two consecutive SEC titles with a win outdoors last year. The Lady Bulldogs have now won three out of the last four indoor conference women’s high jump crowns.


Gusin, who had only competed twice this year before Saturday, passed until 5-11.25 and promptly cleared the height on her first try. She then tallied a mark of 6-0.50 on her second attempt. Gusin was second at the 2015 meet before finishing fourth at the 2016 SEC Indoor Championships.


The Georgia men have now secured the last two SEC shot put titles thanks to a personal record for sophomore Denzel Comenentia. The Amsterdam native took the lead from the first throw and had a season-best mark of 63-0.75 on his fourth attempt. Then after improving his career best to 63-7.50 on his fifth try, the 2016 First Team All-American muscled a mark of 64-3.75 to win the competition by nearly two feet.


With Comenentia’s performance, he moved past 2012 Olympic bronze medalist Reese Hoffa for the No. 3 spot in the school record books and took over the sixth spot on the current national list. This was the second straight title for the Bulldogs in the event after Ashinia Miller won indoors and outdoors last year.


Senior Devon Williams came into the second day of the heptathlon trailing by one point and left the facility on Saturday evening with a 196-point victory. The Marietta, Ga., native gave the Bulldogs a sweep of the heptathlon and pentathlon for the third year in a row after his sister Kendell cruised to a victory in the combined events on Friday.


Williams’ training partner, junior Karl Saluri, grabbed his second top-three finish of his career taking third in the SEC heptathlon after recording 5,731 points. Saluri approached 25 feet in the long jump for a personal best that helped him post his second 5,700-point performance of the year.


Williams began his final day of the heptathlon by tying the 14-year-old school 60m hurdle record of 7.77 (Esteban Guzman). Williams scorched his nearest competitor by .47 seconds and score 1,040 points with his finish. His time, which matches the 13th best in the nation this year, secured the overall lead by 122 following the fifth of seven events.


Clearing his first four heights on his opening try, Williams achieved a personal-best mark of 15-9 in the pole vault to add 849 points to his total. He had gone 15-7 to create a personal record the last time he jumped at the Razorback Invitational. Williams carried a 152-point lead into the final event.


Needing a 2:43 to overtake Garrett Scantling’s school record score of 6,068 set at the 2015 NCAA meet, Williams instead took over the No. 2 spot on UGA’s all-time top-10 list and the second place on the 2017 national performance list.


Saluri finished the 60m hurdles with a season-best time of 8.30 to win his heat and take fifth. He scored 908 points with his effort and finished his fastest time since clocking an 8.20 at the 2016 NCAA Championships.


Passing until 14-9, Saluri took one jump, cleared the bar and then retired from the pole vault to get ready for the 1000m. Saluri scored 760 points on his single attempt.


Saluri sprinted the final straightaway of the 1000m to earn runner-up honors in the race and lock down his third-place overall finish. He completed the competition in 2:45.18 for 817 points and is now expected to advance to the NCAA Championships in two weeks.


Both Georgia distance medley relay teams finished in the top six to score late points for UGA. First, the Lady Bulldogs, consisting of Morgan Ainslie, Micaiah Ransby, Devon Artis and Jessica Drop, clocked an 11:26.58 to take sixth. This shot the foursome up to No. 5 in the school record books.


For the second straight year, the Bulldog men set a school record in the DMR to finish in the top five. This time around, senior Sid Vaughn, senior Maurice Freeman, sophomore Jeramey Hampton and junior Bryan Kamau combined for a 9:40.26 to take third and leave the 9:43.55 from 2016 behind.


The Bulldogs had a weight throw duo finish fifth and sixth to combine for seven points. Junior Asianna Covington snuck into the weight throw finals in the ninth and last spot after reaching 65-7.50 in her first three throws. Improving on her second, third and fourth tries, Covington bettered her No. 3 spot in the school record books with a career-best mark of 68-10 on her fourth throw. This would place Covington in the top 16 on the national performance list entering the weekend.


Entering the weekend with the nation’s fifth-longest throw, senior Shelby Ashe managed a sixth-place finish with her top effort going on her fifth try. Ashe reached 68-3.25 and will now prepare for her final collegiate meet at NCAAs.


On the track, junior Kendal Williams finished fourth in the 60m finals to add five points to Georgia’s total. The Jacksonville, Fla., native crossed the finish line in 6.67 as he now prepares for the NCAA Championships in two weeks.


With a fourth-place finish in the long jump already under her belt, sophomore Kate Hall advanced to the 60m finals on Friday with a career-best time of 7.28. On Saturday, the first-year Lady Bulldog registered a time of 7.35 to take eighth in the finals. That is the third time she has run this time at UGA since transferring from Iowa State.


The Bulldogs will now rest and continue training through next weekend before the NCAA Indoor Championships arrive in College Station, Texas, on March 10-11.


CLICK HERE for the final results from the 2017 SEC Indoor Track & Field Championships.


CLICK HERE for the team scores from the 2017 SEC Indoor Track & Field Championships.


CLICK HERE for the individual scorers from the 2017 SEC Indoor Track & Field Championships.