Kyprianou, who is starting his fourth year as the Bulldogs’ head coach and 11th season on UGA’s staff, has select members of his squads opening up at the Sharon Colyear-Danville Season Opener on Dec. 1, will host a pair of home meets in April and will travel those who qualify to Austin, Texas, for the first NCAA Outdoor Championships in the location since 2004.

“This upcoming season’s schedule has a little bit of a diverse flavor in terms of changing the scene for competitions indoors and outdoors,” said Kyprianou, who guided the Lady Bulldogs to the 2018 NCAA indoor title and the Georgia men to last year’s national outdoor championship. “All in all, we tried to accommodate all group and event areas so we chose meets that we don’t have to split up as a team too much. At the end of the day, our student-athletes must be able to perform at any level in any venue in any conditions.”

Following Georgia’s opener at the Sharon Colyear-Danville Season Opener in Boston, Mass., the teams will crank back up after Christmas break at the UAB Blazer Invitational in Birmingham, Ala., on Jan. 11-12, which is also the spot of this year’s NCAA Indoor Championships.

“We will be starting off with a meet basically for our cross country runners who are in peak condition to go out in Massachusetts and potentially hit an early NCAA indoor qualifying mark,” Kyprianou said.

Indoors, the Bulldogs will stay close by after the UAB meet with a trip to the Clemson Invitational (Jan. 18-19) before taking a group to Nebraska for the Frank Sevigne Husker Invitational (Feb. 1-2). Returning to the Tyson Invitational (Feb. 8-9) in Fayetteville, Ark., for the first time since 2015, the Bulldogs will get a chance in the facility that will house the 2019 Southeastern Conference Indoor Championships (Feb. 22-23). A second Georgia group will also travel to the Iowa State Classic in Ames, Iowa, on Feb. 8-9.

The NCAA Indoor Championships will return to Birmingham’s CrossPlex facility for the first time since 2016 and only second time ever on March 8-9.

“The main difference during the indoor season is the change of scene for the NCAA Championships as they go back to Birmingham, which is in some ways ‘close’ to home and should make it easy to travel to,” explained Kyprianou.

As usual, the outdoor season will begin for the Bulldogs immediately after the indoor season concludes. Georgia will make the short trip to the Yellow Jacket Invitational in Atlanta (March 15-16) before splitting squads at the Florida Relays (March 28-30) in Gainesville, Fla., and Raleigh Relays (March 29-30) in Raleigh, N.C.

The Bulldogs will then play host to the annual Spec Towns Invitational and Bulldog Decathlon/Heptathlon at the Spec Towns Track in Athens. This is the first of two home meet weekends scheduled for Georgia as teams will also come to town for the third-annual Torrin Lawrence Memorial (April 26-27). Pushing UGA’s second home meet two weeks back from SECs, rather than one, is expected to improve the competition for the Bulldogs.

“The importance of our two home meets has elevated this year since we are having some good competition for Spec Towns and moving the Torrin Lawrence Memorial to a ‘prime’ weekend, which will allow us to expose our teams to better competition in the comfort of their own home,” said Kyprianou. “We expect them to be able to qualify for the NCAA Prelims and get some marks that are good enough in the combined events to potentially punch their ticket to Austin.”

Between Georgia’s pair of home meets, the Bulldogs will travel California for the Mt. SAC Relays (April 18-20) and the Beach Invitational (April 19-20).

A third trip in 2019 to Fayetteville will bring the SEC Outdoor Championships for the Bulldogs on May 9-11. The NCAA East Prelims (May 23-25) will return to Jacksonville, Fla., for the first time since being there from 2014-16.

The finale to the outdoor campaign will come with the NCAA Championships (June 5-8) in Austin, Texas. This marks the first time in seven years that Nationals will not be in Eugene, Ore., and the first time they are hosted by the University of Texas since 2004.

“I am excited to go back to Texas for NCAAs for the first time in 15 years as it will be a different venue and that is always good for the sport,” Kyprianou said. “However, it will be hard for anyone to top the great job Oregon has done the past years, regardless if we liked the travel or not. TrackTown USA is track and field in our country.” 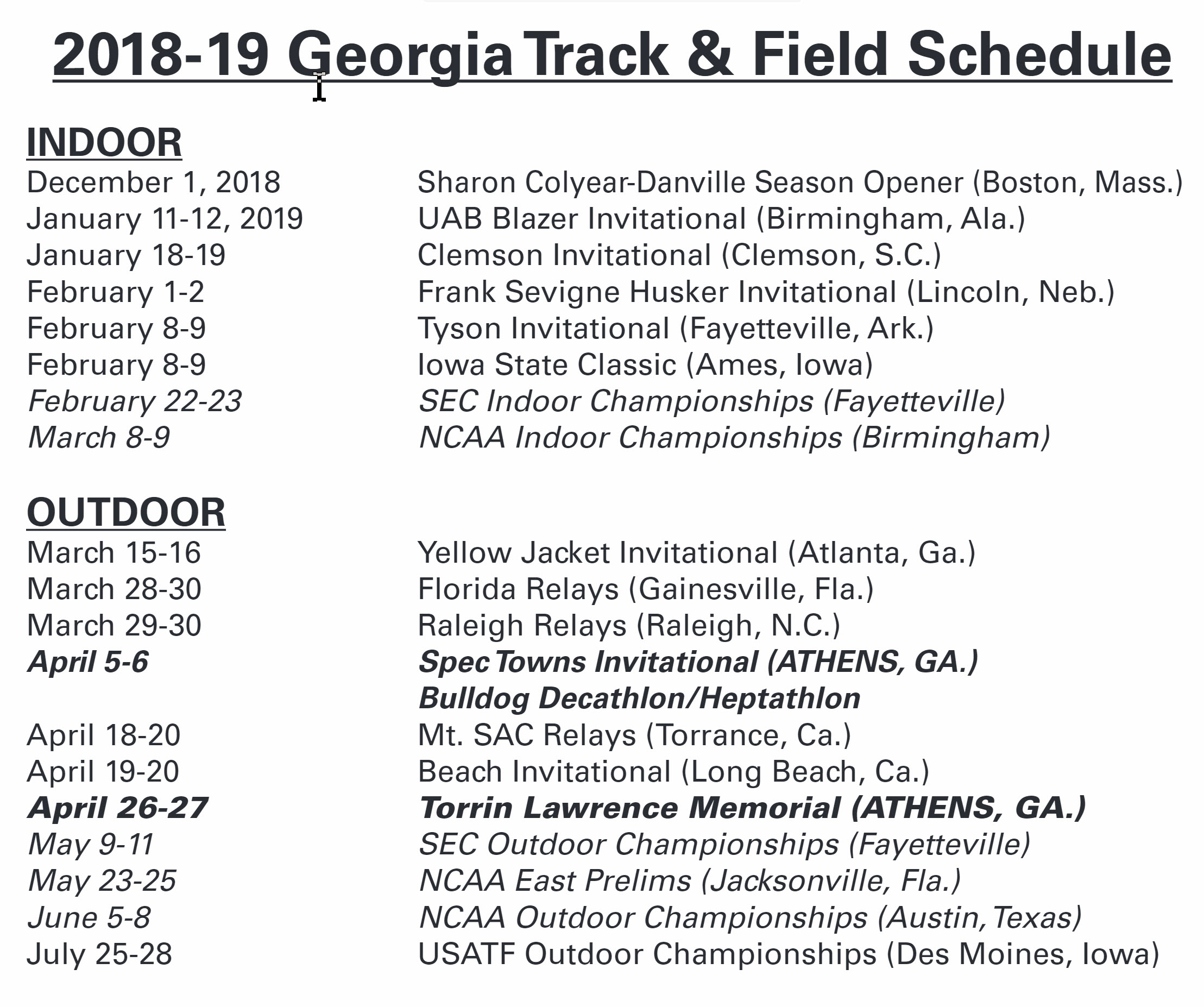