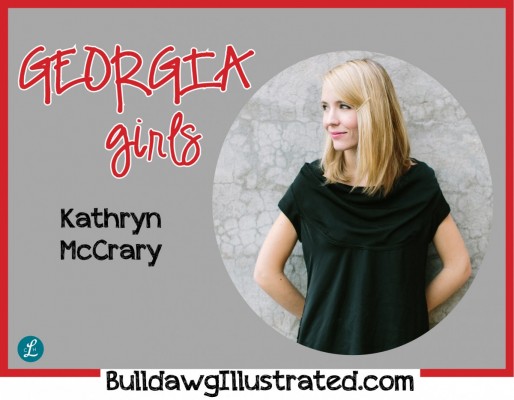 Name: Kathryn McCrary
Hometown: Tampa, Florida
Current Town:   Atlanta, Georgia
What Years at UGA: 2005 – 2009
School: FACS Early Childhood Education
Family: Married to Tyler, dog mom to Penny
Profession:
I am a freelance photographer based in Atlanta, Georgia.  I specialize in shooting food, fashion, and lifestyle, but started my photography career shooting babies and weddings and still love shooting those from time to time.

My time at Georgia was so amazing mainly because of the town that Athens is and the community that surrounded me.  Each year at UGA was so different, but one of my fondest memories would be from Freshman year sitting outside of Park Hall between classes during the fall and taking in the beauty of the seasons (like a true Florida girl!) and the buzz of college life around me.  It was such a simple time in life filled with so much fun, freedom, and possibilities that only college can provide.  Favorite non-sentimental memories involve wearing extreme costumes at socials, staying up way too late, eating too many pokey cheese sticks from Gumby’s, and thankfully laughing most of them all off.

I went to a lot of concerts in Athens, but my favorites would have to be Luke Bryan and Need To Breathe.  They were so much fun and it was way before they were both famous, which was cool.  If I remember correctly, my friend got one of Luke’s guitar picks at the end of the show, and another friend and I got to meet Need To Breathe after the concert.  Total groupies.  The one concert I wish I had gone to was Taylor Swift at the pre-burned Georgia Theater.  I sold my $15 ticket because I needed to study #majorregret.

In college I was a very picky eater and only really liked Transmet, Big City Bread, and DePalmas.  Now, every time I’m back in town I enjoy more adventurous eats like Last Resort, Seabear, and The National.  For being such a small city, Athens has a killer food scene which always makes me look forward to my next visit.

My favorite shop when I lived in Athens was Helix, RIP; now, I can’t get enough of Agora Vintage!

I can booty shake with the best of them and my childhood dream was to be a back up dancer for N*Sync.

Favorite books and blogs (since you photograph for several bloggers):

I’m not a huge reader, but my faves would have to be The Swan House, Same Kind of Different As Me, and The Help. I follow a lot of blogs since I work with a few bloggers photographing their content.  My faves are Love Taza (family), Design Sponge (home), Waiting On Martha (lifestyle), What’s Gaby Cooking (food), and Happily Grey (fashion).

In college it involved dressing up, putting on Georgia ‘G’ face tattoos, sorority squat pictures, eating at friends’ parents’ tailgates, and cheering on the Bulldogs for hours in the blazing sun, surrounded by all of my best girlfriends.  Today, it’s a lot more simple, usually grilling out at friends’ houses with puppies and babies everywhere, and only really watching if it’s an intense game.

what to do:
Whisk sugar, vinegar and oil in a large bowl
Add everything else
Mix well
Chill for a few hours {the longer it sits, the better it is!}
Serve with chips