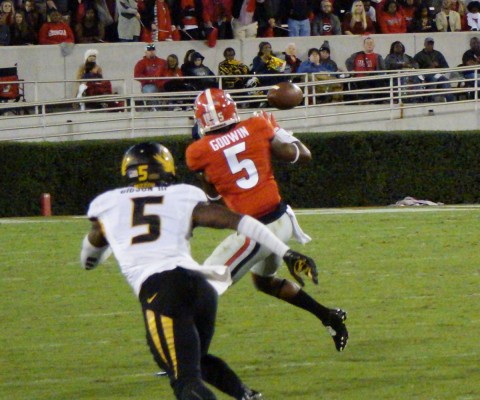 A win is a win. I definitely would have felt much differently today if the scores had been flipped from Saturday’s 9-6 win over the Missouri Tigers in a rare night game at Sanford Stadium. It wasn’t pretty, and it’s clear that the faults this team has likely won’t be fixed during the season. They also fought like mad for 60 minutes to win the game at a point when the season could have easily spun out of control. Let’s get to the rundown.

The 5-star freshman from Hogansville Callaway had a break out game on Saturday night with 127 all-purpose yards including 2 great punt returns that set up the offense with good field position in the 4th quarter.  On punt returns, he looked like Damian Gary with the ability to get up field directly and get positive yardage. He also led the team in receiving yards on a night when the Tigers spent a lot of effort trying to take Malcolm Mitchell away from Greyson Lambert.  Godwin looks like a Percy Harvin type of player with his ability to make plays in space.

21 yards on 22 carries (of course, including sacks) is what you expect when you play an FCS team not the 2-time East champions. Yes, I know Missouri is terrible on offense. The goal line stand on Missouri’s first series after Lambert’s interception was Junkyard-esque as the defense pushed the Missouri offense backwards to set the tone for the night. The ability to control the Missouri running game led to a huge advantage in time of possession for the Dawgs as Georgia had the ball almost twice as much as Missouri.

I have to give a special shout-out to the man who is rapidly becoming the team’s permanent captain.  On a night when he was relatively quiet in the passing game (49 yards on 7 catches), he made the biggest play of the night by forcing the muffed punt, which allowed Georgia to tie the game with Morgan’s 2nd field goal.  Tampa is going to leave Athens as a DGD who just wants to win.

For most of the night, the offensive line got whipped again. 120 yards rushing for Georgia this year typically gets you beaten. The right side of the Georgia line got whipped on the 4th and short early in the game. The 2 sacks of Lambert were troubling, and the 2nd sack could have been disastrous as Theus just got beaten on a speed rush. The play of this group scares the daylights out of me in 2 weeks in Jacksonville.

Middle of the Field Defense

Once again, the middle of the field was open for business most of the game.  The Tigers’ only scoring drive was made possible by attacking the middle of the field between the linebackers and safeties. Georgia had three guys around the receiver on the last of those plays, but no one actually covering the receiver.  One time, they hit the right play to Hansborough as the Dawgs brought pressure from the inside.

Over the last 3 weeks, Lambert’s play has gotten worse.  While he only threw one interception (which could have been deadly on the game’s first play), he had another overturned by replay and had a couple of others dropped.  At other times, he made great throws that were right on the money.  Florida’s guys won’t drop those poor throws, and they’ll make those good throws incompletions.

Player of the Game

In a game where you don’t allow (or score) a touchdown, the player of the game has to go to a defensive player, and I’m going to go with our best UAB transfer, Jake Ganus.  He led the team with 9 tackles including 1.5 TFLs and a sack.  He seemed to be everywhere on defense as I watched Saturday night.  The interview he gave after the game shows what this whole game is really about.  He’s only been in Athens for 9+ months and already loves the place like most alums do.

No touchdowns and fewer than 300 yards of total offense are awful for a program that prides itself on imposing its will on defenses especially in the running game.  If we had lost and wasted the effort of the defense, this grade would have been a failure of epic proportions.  We’ve seen a Georgia offensive line that was dominant even in losses last year become a mid 90s Georgia offensive line that isn’t physical and doesn’t appear to have a leader.  For a program that has developed excellent QB play even with limited physical talent, it’s hard to watch the QBs play right now.

With the performance of the defense, this game should have been a Georgia romp as the defense only gave up 164 yards of total offense.  As I mentioned above, the defensive statistics looked like what we normally do to FCS offenses not a former Big XII team that strutted into the league talking about Old Man Football.  With a couple of exceptions, the secondary played well especially Rico McGraw and Juwuan Briscoe.  The future is bright on the back end with these guys.

An A for the defensive staff, an F for the offensive staff, and a B for the special teams coaching gives the staff an average grade.  Coach Richt knew how important this game was and made some 1st half decisions with the onside kick (the ball needed to go 2 more feet) and the 4th down conversion attempt with the idea of going down swinging.

Once again, a win is a win even when it’s not satisfying.  We should have run the Tigers all the way back to the Big XII on Saturday night, but we didn’t do it.

Since we have a bye week before the Cocktail Party, and we’re at the season’s midpoint (where did the time go?).  I wanted to put together my thoughts on where we stand heading into the season’s homestretch.

This offense has a lot of playmakers at the skilled positions but has two fundamental problems: Spotty offensive line play and very inconsistent quarterback play. The offensive line seems to be missing an aggressive, mean streak that they had last year and probably goes directly to missing Boss Andrews at center.  Can Sale develop that mean streak during the bye week? The quarterback problems aren’t going to be fixed over the next 2 weeks, so Richt & Schottenheimer need to find a plan that plays to Lambert’s strengths. They better or the Cocktail Party will be a Halloween nightmare with Jason, Freddy, and Michael Myers all mixed together.

This defense has dominated offenses that have been challenged from a talent standpoint or with quarterback problems. They have clearly struggled with teams that have quarterbacks with the ability to hurt you with their legs (Dobbs) or have offensive lines that can protect the pocket (Coker). Injuries to Jordan Jenkins and John Atkins haven’t helped matters as well. This team will go only as far as the front 7 can take them with the youth and inexperience in the secondary.  It’s time for the law firm of Jenkins, Floyd and Carter to stand up and lead this team in the 2nd half of the season.

Some great plays with a couple of big punt returns mixed in with some very bad game-changing plays like a blocked punt and fumbled kick returns makes for a very mediocre performance.  Until Saturday night, the kickoff coverage was inconsistent.  Morgan has been inconsistent, and Barber has generally been a liability in changing field position.

Coach Richt hasn’t done his best work with this team.  Other than the USCe game, the team has failed to come out playing with an edge from the opening whistle, and, in the 2 losses, folded like a cheap suit when adversity and momentum hit especially in the 2nd and 3rd quarters.  The jury is very much out on the effect of Brian Schottenheimer on the Georgia offense.  He inherited the QB situation, but his staff also inherited what was supposed to be an outstanding offensive line.  The defense under Pruitt has seemed to take a step back in year 2 especially in the secondary. We’re going to have to win with defense the remainder of the season, so Pruitt is going to have to earn his keep.

We’re 5-2, which is where many people thought we would be before the season.  It’s hasn’t been pretty at most times this year, but some of the team goals (Atlanta, in particular) and to beat the Big 3 are still in our control.  The season starts on Halloween afternoon on the banks of the St. Johns River.

While we won’t see him the rest of the season (thanks, Knee-land), the workhorse of the Georgia offense was spectacular in the season’s first half and was only overshadowed by the man who will likely win the Heisman, Leonard Fournette.  Get well soon, Nick.  The DawgNation is pulling and praying for you.

Mitchell gets the honor due to his leadership in addition to his performance.  Michel may be the best player on the team at this point in the season.  They both have performed well even as they draw a lot of attention from opposing defenses.

Jenkins was sorely missed after going down in the Tennessee game.  He has been the defense’s leader throughout the season and the main disruptive force coming off the edge. We need him back at 100% for the Cocktail Party.

That’s what I think. Let me know your thoughts below.