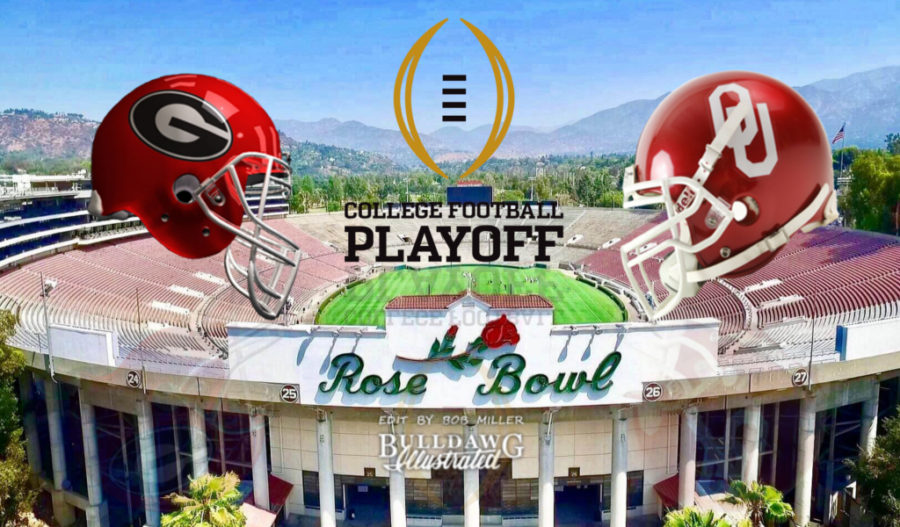 The Bulldawg Illustrated staff gives their predictions for the Bulldogs first appearance in the Rose Bowl since 1943 as they face the No.2 Oklahoma Sooners.

This one scares me Dawg fans. Not necessarily because of the teams on the field, but because Georgia’s 2017 run has already been so special. The reality is that the Bulldogs are the new kid to the party, so it wouldn’t be surprising to see them struggle at the onset of the pressure-filled Rose Bowl. If that happens, an early lead by the Sooners spells disaster for Georgia. A shootout is exactly what Oklahoma is hoping for. If Georgia is playing from behind, then their magic run comes to an end. However, if Georgia sets the tone by getting on the scoreboard early thereby dictating the flow of the game, then see you in The Benz baby.

Trailing by 2, late in the 4th, the Dawgs ground out enough yards to get Rodrigo the Great into position for the game-winning attempt from 45 yards out. Snap is good, plenty of leg, but drifting … hits upright, but knuckleballs over the crossbar. Dawgs 37 Sooners 36. See ya in the ATL!!!

Good as this Bulldog defense is, I don’t think it will shut down Oklahoma’s Heisman Trophy winner but then, shutting down and slowing down are two different things. The Roquan Smith-fueled Dawgs will be getting after Baker Mayfield from opening whistle to the closing gun and will frustrate him just enough to keep the Sooners well below their 40-plus scoring average. At the same time, the Georgia offense will pound its potent running game at the Oklahoma defensive front, eat clock and thus keep Mayfield watching from the sidelines a good bit of the contest. Here, in this famous stadium, Kirby’s guys go to 13-1 and punch their ticket to the Jan. 8 national championship game back at Mercedes-Benz.

Holding Heisman winner Baker Mayfield below 30 behind Roquan Smith and Co and running the ball down their throats with our key three-headed monster: Chubb, Sony, Swift. I bet the tight end is open, Fromm stage-ready for Hollywood.

Oklahoma’s offense presents many of the same problems to Georgia’s defense that Missouri did back during the regular season on October 14th. The Bulldogs won that affair 53-28 and the Tigers passed for the most yards against the Dawgs ‘D’ in the 13 games they have played this season so far, with Drew Lock putting up 253 yards through the air. Oklahoma can do what Mizzou did but with a Heisman Trophy-winning QB and better surrounding cast, especially along the offensive line. Plus, the Sooners are a more balanced team on offense and can run the ball.

Of course, Oklahoma’s defense isn’t much better than Missouri’s either. Can the Sooner’s D handle the physicality of the Bulldogs ground game? Can Georgia’s D make enough stops and keep things close long enough for that ground and pound attack to wear down the Sooners? I think so. Pass the Kool-Aid and give me Georgia over Oklahoma 41-27.

I do not have a good feeling for this game. Every time I convince myself that Georgia defense will get an. To allow the offense ball control, I relapse and doubt the Dawgs ability to prevent the big play by Oklahoma’s Heisman winning quarterback. I’m taking the Dawgs 45 to 35 with zero confidence in the pick.

The 2017-2018 season has a feel of destiny for the Georgia Bulldogs. The parallels to 1980 are eerily similar. Georgia is led by a generational true freshman in Jake Fromm. The Dawgs lean on a powerful rushing attack behind an offensive line that was a major question mark heading into the season. The defensive play resembles the Junkyard Dawgs of Bulldog lore with a few modern-day SAVAGES sprinkled in.

It is a “Bucket List” season for all Dawg fans. As an homage to the past, the Fighting Irish were on the schedule for the first time since 1980 and the Bulldog Nation invaded South Bend and Touchdown Jesus seemingly blessed the Dawgs journey. The Dawgs then destroyed the Gators in Jacksonville for their largest margin of victory in the rivalry since 1982. Follow that up with the Dawgs avenging their lone loss of the season against Auburn Tigers in the SEC Championship and everything has gone to near perfection. As if that weren’t enough to fill the heart and soul of every lifelong Dawg fan the ride was not over. On December 3rd the Bulldogs received an invite to the 2018 Rose Bowl marking their first appearance in the Granddaddy of Them All in 75 years. It only makes sense that the season will end with the Dawgs hoisting the National Championship Trophy in Atlanta, Georgia on January 8th.

Still, first things first, the Dawgs must defeat the Oklahoma Sooners led by Heisman Trophy quarterback Baker Mayfield. If I’ve said it once I’ve said it 100 times, there is something special about this Georgia team and the chemistry and love that they have for one another means more than any X’s and O’s.

We have the skill to win BIG! There is no stopping Baker Mayfield! We can slow him down but not stop him. They will score. They will score a lot, but I think we can score more. Chubb and Michel can really do some damage to this OU defense. Plus adding swift to the mix can really hurt them too. I think the time of possession will be key for the Dawgs. If we run it and run it some more like the regular Georgia we can burn some minutes off the clock and keep the playmaker, Baker Mayfield, off the field. Our offense can play defense in this game. Although we will control the clock, Baker and that OU offense will score fast; therefore, the final score will be 37-31, Dawgs on top!

The ‘Junkyard Dawgs’ defense shows just how stout they are by rattling Heisman winner, Baker Mayfield and forcing turnovers. Nick Chubb, Sony Michel, and D’Andre Swift add to their stats and run all over the Sooner defense. However, it’ll be Jake Fromm who ultimately wins the game for the Bulldogs! He keeps his composure on another big stage and proves to the world that Georgia is the real deal and came to compete in the playoffs. The Bulldogs strong defense shut down a high powered offense and send the team home to play in its first national championship in 35 years.

I believe the Bulldogs defense is stout enough to stop a Baker Mayfield that is not operating at 100%. I think they find a way to stymie the Sooners rushing attack and force Mayfield to make plays with his arm, but he will not find the same amount of success against such a powerful defense. The Georgia offense will continue to cycle running backs in and out and grind down the Sooners 41st ranked rush defense. I think a huge difference maker in this game will be the starting field position for each team as the Bulldogs hold a large advantage over the Sooners in special teams. I expect Nick Chubb to have a huge day for their offense and I like Mecole Hardman to return a kick for a touchdown. I think the play of the offense and the added scoring from special teams leads the Bulldogs to Atlanta.