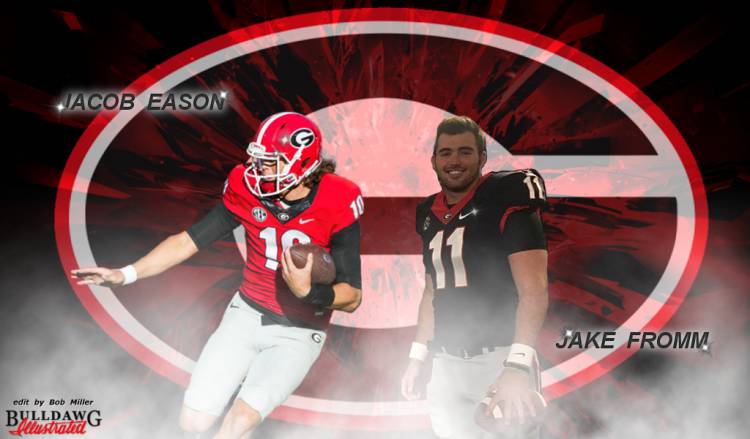 With freshman Jake Fromm and sophomore Jacob Eason on the roster, the Georgia football program looks set at the quarterback position for the next two to the three seasons; so, will the Bulldogs take two in 2018?


While it is almost impossible to predict with 100% certainty what UGA will do for this recruiting class, one of the positions it looks like the coaching staff is putting an emphasis on for 2018 is quarterback. So far, Georgia has offered 11 quarterbacks, eight of which are classified as dual-threat and three as pro-style. The Georgia coaching staff has been very active in the month of February sending out five scholarship offers to QBs. In addition, only three of the offers are to QBs from the state of Georgia, but they are some very highly touted prospects. Unfortunately, they are also committed elsewhere currently.


The No. 1 pro-style QB, Trevor Lawrence, out of Cartersville High School, is committed to Clemson, and the Peach State also boasts the No. 1 dual-threat QB prospect in Emory Jones out of Heard County High School, who is currently committed to Ohio State. The No.3 dual-threat QB prospect, Justin Fields out of Harrison High School, is committed to Penn State. If the Bulldogs are going to take a top-5 quarterback prospect for the third year in a row, they are either going to have to flip Lawrence, Fields, or Jones, or they are going to pilfer one from out-of-state.


Here are the 11 quarterbacks the Bulldogs have offered so far.


Out of those 11, who are the two that could possibly grace the Georgia roster in 2018?


Keep your eyes on the dual-threat QB out of Fort Dorchester High School from North Charleston, SC, Dakereon Joyner. Even though he was first offered by the previous coaching staff, there is still interest between the current staff and Joyner. There is also the possibility that Georgia could flip Harrison High School’s Justin Fields from Penn State, and I don’t think the recruiting battle for Trevor Lawrence is quite over as of yet. Kirby Smart and company have shown a knack for flipping prospects already committed to another program over to the red and black. Orlando, FL prospect Joe Milton is another intriguing QB to keep a watch on. He was offered recently on February 24th, and even though Milton is listed as a pro-style prospect, he is very athletic and can take the ball and scamper down the field. Think of a taller, bigger DJ Shockley.


Here’s what Lucas Rogers, Michael Pope, Savannah Richardson, and Rick Pope had to say during Bulldawg Illustrated’s last live recruiting chat about a week ago.


Lucas: “QB position right now is crazy to be honest. It could be any of the guys that they have offered, but it could be none of them also. I think it is going to be a dual threat guy they can try to develop. Not sure who because a lot of people aren’t going to like joining a QB room with (Jacob) Eason and (Jake) Fromm.”


Michael: “I really think they will go hard after Justin Fields. I think Kirby wants a dual-threat quarterback, and Fields will be an easier battle than (Emory) Jones … although I do not think they will give up on Jones.”


Savannah: “Don’t count out Trevor Lawrence just yet, and I think UGA just takes one QB (in this class).”


Rick: “Dakereon Joyner out of South Carolina is who I see us taking.”


Jacob Eason will be entering his junior season at UGA and there is the possibility and potential that ‘Skinny’ could declare early for the 2019 NFL Draft following 2018. As of right now, for the upcoming season, Georgia has two other scholarship QB on the roster besides Eason in senior Brice Ramsey and freshman Jake Fromm, but 2017 is Ramsey’s last year of eligibility. Adding depth behind both Eason and Fromm is going to be key for 2018, regardless of whether or not Eason departs for the NFL after his junior season. There is a wildcard for the Bulldogs, though.


And that wild card is 2017 preferred walk-on John Seter, an athletic 6 foot 3 and 180 lbs signal caller out of Lovejoy High School, Hampton, GA. He could provide some depth for UGA headed into 2018 and 2019, but even if he ends up being a diamond Dawg in the rough, I still think Georgia should pull the trigger on two QBs for 2018. Carrying 4 scholarship QBs on the roster for 2018 and possibly for 2019 may seem like overkill, but playing in the rough and tumble SEC, even though we don’t like to think about it, guys are one injury away from being out for an extended period of time or the season. Plus, competition is good for the soul. It would also set the team up for good depth for 2019 and not have to rely on a freshman as a back-up in 2020 during Fromm’s senior season … if he doesn’t redshirt.


I could be wrong but look for Georgia to get at least one quarterback commit for 2018 by the end of July. And don’t be surprised if more scholarship offers go out to dual-threat QBs over the next 5 to 6 months.