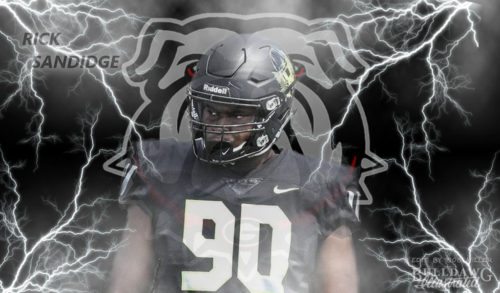 NEWS & NOTES: Sandidge was offered back in January by Georgia and included UGA in his top-11 schools on May 1st. The Bulldogs new DL Coach Tray Scott recruited Sandidge when Scott was coaching the d-line at UNC. Sandidge visited Athens with his family the weekend of July 15th and Tweeted out he loved UGA; however, he also had a very good visit to Columbia, SC on July 20th and 21st. On August 7th, he released a top seven that included UGA and USCe. It looks like this may end up being a Bulldogs vs. Game Chickens battle with South Carolina having a slight edge currently. This football season, Sandidge has visited UNC Sept. 9th and South Carolina on Sept. 16th.

NEWS & NOTES: Trout was offered by the Bulldogs’ coaching staff back in February, and he put UGA in his top 9 on June 13th. The big D-lineman out of Missouri has a number of major FBS offers. Trout had a busy summer taking unofficial visits to schools like A&M, TCU and Oklahoma. The big question is whether or not Trout will stay home and commit to Mizzou? And if he doesn’t, then where is he most likely to go? Well, we got a little clearer picture on Tuesday night, when Trout released his top six which includes the Bulldogs along with Bama, Miami, Missouri, Southern Cal, and UCLA. A&M, TCU, nor Oklahoma made the cut. He most recently took an official visit to UCLA this past weekend.

NEWS & NOTES: Ishmaele was offered by Georgia back in May. He is considered one of the top DT prospects for 2019. His recruiting is wide open at the moment, but the in-state LSU Tigers are considered favorites here and Alabama is also a strong early contender.

NEWS & NOTES: Scott is already an imposing lineman in the trenches as a sophomore at 6 foot 0.5, and 300 lbs for Douglass High School. It’s still very early in Scott’s recruiting process and there is the question of which side of the ball will he play on at the next level, O-line or D-line, but he is definitely a prospect to keep your eye on.