Pounding out 14 hits and one home run during the first five innings propelled Georgia’s offense to an 11-1 win over Georgia State. The game ended after five innings due to the run-rule call. This ruling occurs when a team leads by eight or more runs after the fifth inning.


Amanda Ablan started for Georgia and pitched the first three innings. She earned her first win of her collegiate career as her record improves to 1-1. Ablan struck out five, walked three and gave up two hits, including a solo home run in the first inning that gave GSU its only score. Kylie Bass closed the game out, pitching two scoreless innings. She posted one strikeout and two hits.


Five of Georgia’s batters notched two hits apiece in the matchup. Alyssa DiCarlo hit the three-run home run to end the game and collected four RBI on her two hits. Cortni Emanuel Alysen Febrey and DiCarlo each scored twice in the match.


Georgia State’s solo shot in the first would be the only kind of momentum the Panthers had all game. The Bulldogs batted completely around and secured the win in the first with six runs. Georgia scored on eight hits and two errors in the frame. 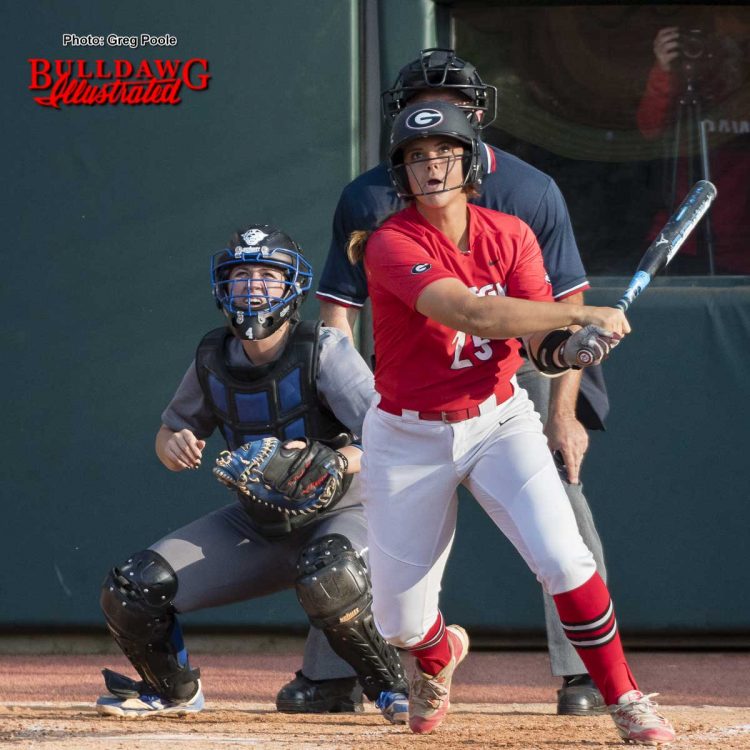 In the second frame, two more runs came after Lacey Sumerlin hit a double to left center. Sumerlin reached home after Alysen Febrey walked and a hit and error from Brea Dickey. Jordan Doggett then hit a RBI single to make it 8-1.


DiCarlo finished the game in the fifth, as Ciara Bryan got on base with a single before Cortni Emanuel reached on an error, setting up the final runs of the game. The home run was number eleven for her on the season.


The Bulldogs head to Texas A&M this weekend for a three-game series starting on Friday. Game one starts at 4:30 p.m. ET.