As you walk in Sanford Stadium this coming Saturday for Georgia’s home game against Samford and adhere to the SEC’s new clear bag policy, you can do just that!


By purchasing a VIP Survivor clear bag, Georgia fans will not only create jobs for women-in-need but also have the opportunity to make a donation to UGA’s sports endowments and The Kirby Family Smart Foundation.


The brainstorm behind this very worthy endeavor is philanthropic entrepreneur and handbag designer Leigh Ann Barnes of Athens, who is the wife of ultra-successful Georgia swim coach Jack Bauerle.


“We thought if you must carry a clear bag, why not carry something that makes a stylish difference? That’s what inspired VIP Survivor’s Game Day bag. The handbag line is made by women-in-need both here in Athens, Georgia and in India. Our bags create much-needed jobs here in America and abroad. Since they are created by women for women … style and function are paramount.”


“One of my main goals was designing a bag every woman would feel confident to carry. Being ‘overexposed’ with a see-through bag creates an uneasy feeling. With our game day skin covers, you can play by the clear bag rules and still have style. Our bags allow you to tailgate and enjoy the game knowing your personal possessions are hidden. When you go through security, simply remove the leather cover to show your belongings.”


And as Barnes points out, not only does the purchase benefit VIP Survivor’s job program, it raises money for some incredible sports non-profits at the University of Georgia.


“When you go to VIPSurvivor.com you can decide which athletic non-profit and endowment you want to help. Barnes said, “We’re excited about our new fundraising program and the women spearheading it. The women on this week’s cover (of Bulldawg Illustrated) represent what it means to be a VIP.” 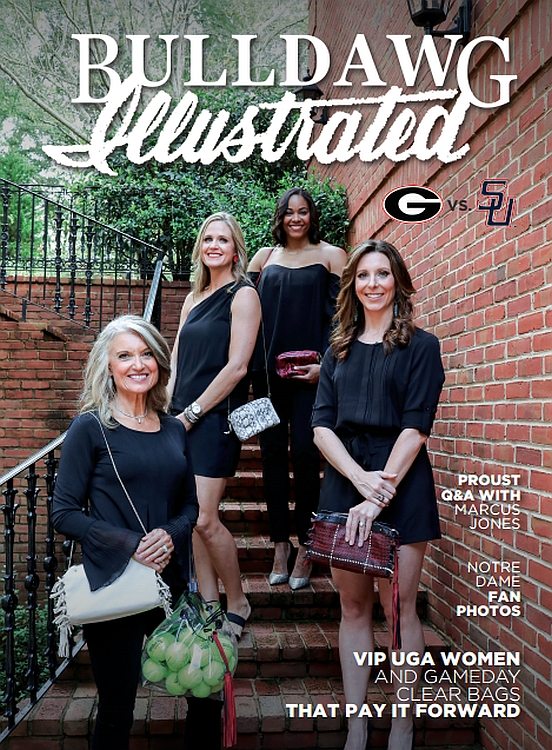 They are UGA coaches and former UGA athletes that have been paying it forward ever since their graduation. They live their lives building confidence in others as coaches, coaches’ wives, teachers, and friends.


“We want to honor and recognize the women of Athens who ‘coach up’ the people they encounter,” said Barnes. “One woman who has personally inspired me to reach beyond is current volunteer assistant coach for UGA Gymnastics (and former UGA Gymnastics coach) Suzanne Yoculan Leebern. Almost six years to the day, Suzanne placed the first custom handbag order that later became one of my best sellers. I’m not an athlete; wasn’t a gymnast, but she became a coach to me. Her encouragement and belief in our product line spurred what VIP Survivor is today. I’ve learned a great deal hanging around coaches and coaches wives. They create a team wherever they go and highlight the strengths in others.”


As Warren Buffet says, ‘get some skin in the game.’ Invest in something you believe and make a difference. Barnes continued, “This is exactly what these coaches and coaches’ wives do daily. They invest in student-athletes’ lives to become the best on and off the field.”


It’s also what Barnes hopes the game day bags signify to the Bulldog Nation. Each person carrying the bag showcases their investment in helping build character and empowering student-athletes in need. It’s a win-win … creating jobs for women-in-need while raising funds for The Kirby Smart Family Foundation, and other UGA sports endowments.

Character traits you value the most: Humility, toughness, competing.

Best thing about being a Lady Bulldog is: Confidence and determination to accomplish great things.

Name a VIP who instilled confidence and strength in you: Coach Andy Landers

Character traits you value the most: Honesty, humility, confidence.

Best thing about being a Georgia coach: The ability to help inspire and positively influence the athletes that are on the gymnastics team now and in the future.

Name a VIP who instilled confidence and strength in you: My mom, Patti Kupets.

Character traits you value the most: Honesty, toughness, and high morals.

Greatest accomplishment: As a student-athlete – Being named one of the 10 most influential people on campus and receiving a postgraduate scholarship for my community service efforts.

Best thing about being a Lady Bulldog is: There are so many great things I could go on and on about but at the end of the day, it’s the people who have been a part of this program and who are a part of it now that make it great. We are family!

Name a VIP who instilled confidence and strength in you: My mother.

⦁ Head Georgia Lady Bulldogs’ Coach
⦁ Honored as WBCA Maggie Dixon NCAA National Rookie Coach of the Year and Advocates for Equity Rookie Coach of the Year
⦁ Committed to her student-athletes’ success beyond the court encouraging leadership, personal, and professional development
⦁ Created the NCAA-recognized “Beyond Basketball” initiative, which is an all-female group that meets monthly to educate, support, and connect women of all ages and ethnicities by creating an environment for members to flourish
⦁ Mother of a 10-month-year-old girl
⦁ Played at Alabama – post-graduate scholarship winner, SEC Community Service award

Character traits you value the most: Loyalty, work ethic and giving back.

Best thing about being a bulldog: The camaraderie of great people paired with the passion and determination to excel.

Name a VIP who instilled confidence and strength in you: My parents and Coach Andy Landers.

Character traits you value the most: Integrity, compassion, and respect/loyalty.

Greatest accomplishment as student-athlete and as an adult: Getting my degree from the University of Georgia, and having and raising two beautiful children with my husband Jeff.

Best thing about being a Georgia Bulldog: The best part about being a Bulldog is being part of a school that loves, honors and values the individual student and helps them to be the very best that they can be, and reach higher than they ever dreamed, or imagined they could!

Name a VIP who instilled confidence and strength in you: My high school coach and my teammates.

Greatest accomplishment as a student-athlete: Being a member of the first Swimming and Diving national championship team title.

Greatest accomplishment as an adult: Marrying my best friend, Brandon Moreno, last May.

Best thing about being a Lady Bulldog: Not having to wear orange.

Name a VIP who helped build confidence and strength in you: My Grammy.

Character traits you value the most: Loyalty, commitment and work ethic.

Greatest accomplishment: Helping young women reach their full potential in every aspect of their lives.

Best thing about being a Georgia coach: Is the national respect we have in the academic arena and the national success of so many of our teams.

Name a VIP who instilled confidence and strength in you: My Dad, he built confidence in me and was driven to make sure his four girls had every opportunity to be competitive in a men’s world. He taught me that there is no such thing as failure. So go for it all!

⦁ One of most decorated coaches in the history of collegiate gymnastics winning 10 NCAA team titles (37 individual champions) and 16 SEC team titles. Coached for 26 years at Georgia. Named National Coach of the Year and SEC Coach of the Year multiple times.
⦁ Current volunteer assistant coach for UGA Gymnastics
⦁ Involved with fostering relationships with the Ten-O club, which boast 800 members, the largest gymnastics booster club in the nation
⦁ uthored one book – Perfect 10: The UGA Gym Dogs & The Rise of Women’s College Gymnastics in America
⦁ Active member in the Athens community donating her time with United Way, Habitat of Humanity, Athens Regional Medical Center’s Breast Health Center, and Special Olympics
⦁ Inducted into the State of Georgia Sports Hall of Fame (2010)