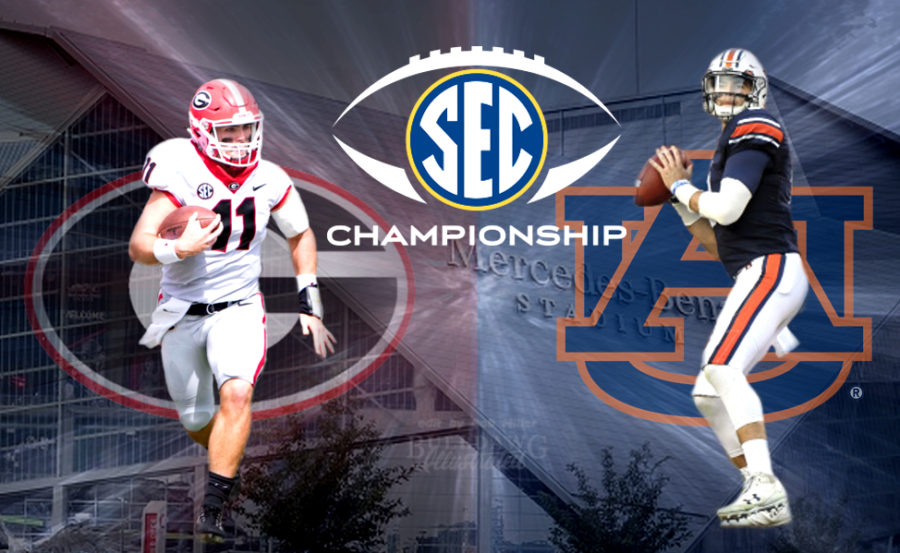 We have the game day schedule and broadcast as well as parking, stadium, transportation, ticket information and more in the 2017 SEC Championship Central. This year’s Southeastern Conference Championship game will feature the Georgia Bulldogs versus the Auburn Tigers on Saturday, December 2, 2017 in the Mercedes-Benz Stadium in Atlanta, GA.

Since the Southeastern Conference was split into East and West Divisions and a game was played between division winners to determine the SEC Champion in 1992, this will be the first time that Georgia and Auburn have faced each other to vie for the crown. The Tigers are designated as the home team and the Bulldogs as the visiting team. Western Division teams are designated the home team in odd-numbered years whereas Eastern Division teams are in even-numbered years.

The winner of the SEC Championship Game automatically qualifies for a spot in the Peach, Cotton or Fiesta Bowls if that team is not selected to participate in the four-team College Football Playoff. This year, the CFP has semifinal games at the Sugar and Rose Bowls and the national championship will be played in Atlanta on Monday, January 8.

IMPORTANT NOTICE: The SEC Clear Bag policy will be in effect for the SEC Championship game between Georgia and Auburn at the Mercedes-Benz Stadium as well as fan-related events like the Dr. Pepper SEC FanFare and Georgia Prep Rally at the Georgia World Congress Center. For more information on the SEC’s Clear Bag policy:

The SEC is responsible for the Football Championship ticket procedures. 32,600 tickets (16,300 per school) are allocated to the participating institutions. The SEC distributes the remaining tickets to the SEC office, sponsors, suites, Mercedes-Benz leaseholders and SEC Championship season ticket holders. UGA’s ticket allotment is distributed amongst TGBC donors, UGA faculty/staff, UGA students and other institutional needs. There were approximately 11,400 tickets that were distributed to TGBC donors.

Georgia Bulldog Club Donor Tickets – SEC Championship Game seat allocations were determined based on Hartman Fund priority point totals whereas the number of tickets that donors secured was based on your 2017 Hartman Fund giving total and/or your Magill Society commitment. Based on ticket supply and donor demand, SEC Championship Game tickets were distributed as follows:

Club Level tickets were awarded to eligible patrons who requested with a 2017 Hartman Fund cumulative priority of 198,256 points and higher.

Reserved (Non-club) tickets were awarded to eligible patrons who requested with a 2017 Hartman Fund cumulative priority of 32,701 points and higher.

6 tickets: 2017 Hartman Fund donors who contributed $10,000 or more AND/OR Magill Society members in the midst of $100,000 commitments or above with a Hartman Fund priority points score of 32,701 and higher were able to secure up to 6 tickets.

All SEC Championship game tickets will be sent via “Print at Home” by Wednesday, November 29th.

Championship game point cutoffs were determined by arranging Hartman Fund and Magill Society donors in priority point rank order and by assigning tickets based on availability.

Donors can view your priority points online by logging in to your account via The Georgia Bulldog Club website, CLICK HERE, and clicking View Your Priority Points under the Manage My Account Tab. Donor priority was determined based on Hartman Fund and Magill Society contributions made by November 16th, 2017.

All Faculty/Staff, who submitted a ticket request, with a priority level between 1A and 21D will receive tickets.

All SEC Championship game tickets will be sent via “Print at Home” by Tuesday, November 28th.

IMPORTANT NOTICE: Fans should be aware of scammers selling counterfeit and stolen tickets. For more information: