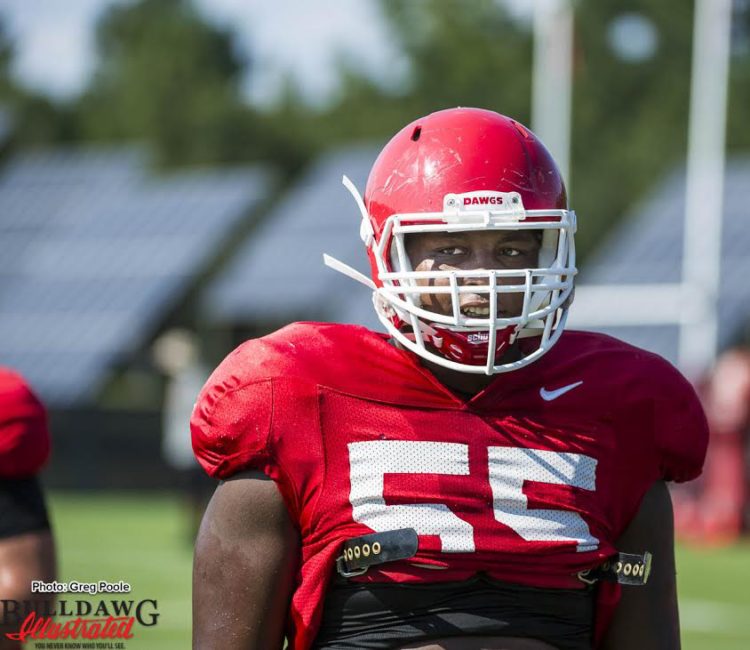 The Georgia Bulldogs are coming off a gut-wrenching last-second loss to the Tennessee Volunteers, but have the 24-hour rule in effect and have to move on and prepare for South Carolina.

The Georgia Bulldogs suffered a very tough loss in their last game but the team as a whole has shifted their focus to the South Carolina Gamecocks and have begun practicing for that game.


There were three very interesting developments that stuck out to me in practice yesterday on both sides of the ball.


3. Players Present on the Defensive Line

The Bulldogs had to be happy to have David Marshall, who was ruled out of Saturday’s game against Tennessee with a concussion, at practice yesterday in full capacity.


Marshall was in a black non-contact jersey but seemed to not have any limitations and he should be ready to go for the Bulldogs next contest against South Carolina.


However, John Atkins was missing from practice and his potential availability for the team’s next game will be interesting to watch as the week progresses.

Nick Chubb looked 100% and ready to go in practice after only carrying the ball one time against Tennessee.


Chubb is a very key player on the Bulldogs offense and he will help the team even more in the running game, which should open up the passing game for the Bulldogs young quarterback Jacob Eason.


1. Dyshon Sims working out at Center

Seeing Dyshon Sims work on snapping the ball as a center was by far the most interesting development at the Bulldogs practice yesterday and there is no telling what this may mean for the Bulldogs this season or even next year.


The staff may consider moving Sims to center, shifting Brandon Kublanow to left guard, and giving Isaiah Wynn a shot at left tackle after the Bulldogs offensive line struggles or Sims could just simply be practicing at center so that the Bulldogs have depth at that position if Kublanow were to go down.


Regardless of what Sims practicing there may mean, It will be very interesting to watch moving forward and is something I will have my eye on as the week progresses.