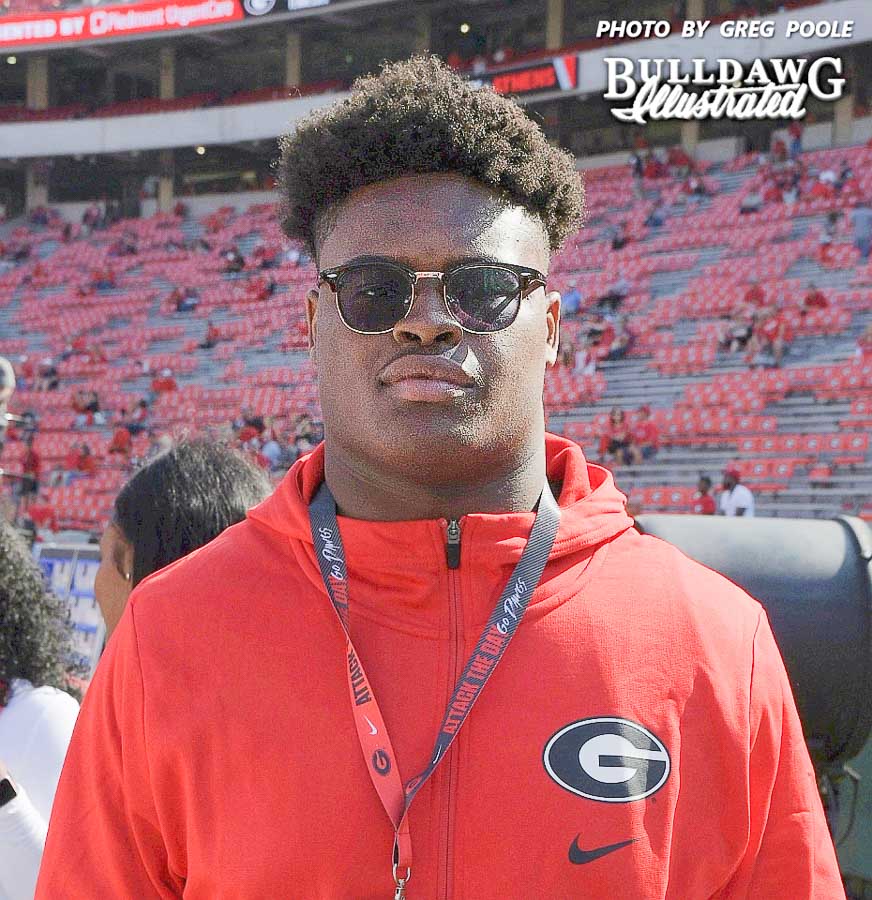 NEWS & NOTES: Since UGA offered C. Barmore just over a month ago on Oct. 2nd, his recruitment has literally exploded. The Philadelphia, PA prospect has received over eight offers since the Bulldogs offered. He had been committed to Temple but de-committed from the Owls last on Oct. 6th.

Barmore is a physical specimen at nearly 6 foot 6 and 292 lbs and is athletic for a player his size. However, he has only been playing football for about a year; so, he is still raw but his potential is sky high.

NEWS & NOTES: Jordan Davis has been an “under the radar” type prospect despite being a 4-star D-line prospect. His recruitment has been very low key. In that case, what is there to know about Davis?

Back in August, he told UGASports.com, CLICK HERE to read FREE article, that the schools he talks to the most are Florida State, Georgia, N.C. State, North Carolina, and South Carolina. The good news for the Bulldogs is that he has a good relationship with UGA D-Line Coach Tray Scott.

“The schools I talk to the most are Florida State, Georgia, N.C. State, North Carolina, and South Carolina,” he said. “I have a really strong relationship with coach Scott at Georgia. He came from North Carolina and he was the guy that gave me my first offer. I talk to him every other day. I told him that it’s probably going to slow up since we’re in the season now but I still have love for him.”
He recently got a crystal ball prediction to Georgia from 247Sports’ Benjamin Wolk as well.

NEWS & NOTES: Sandidge was offered back in January by Georgia and included UGA in his top-11 schools on May 1st. The Bulldogs new D-line Coach Tray Scott recruited Sandidge when Scott was coaching the position group at UNC. The Concord HS senior visited Athens with his family the weekend of July 15th and Tweeted out he loved UGA; however, he also had a very good visit to Columbia, SC on July 20th and 21st. On August 7th, he released a top seven that included UGA and USCe. It looks like this may end up being a Bulldogs vs. Gamecocks battle with South Carolina having the edge currently. This football season, Sandidge has visited UNC on Sept. 9th and South Carolina on Sept. 16th, and he visited Columbia, SC again on Oct. 28th. Good news, though, Sandidge took a visit to UGA on Saturday, Nov. 4th for the game versus the Gamecocks. He has an official visit planned to Michigan for Nov. 25th.

NEWS & NOTES: Sione Vea-Kava is a JUCO DT prospect out of East Los Angeles College in California and is from Honolulu, Hawaii. Georgia offered the nearly 6 foot 6 and 270 lbs D-lineman back in August. One might think this is a long shot, but there is significant interest on the part of Vea-Kava in Georgia and Tray Scott likes the potential of the athletic big man who could play either at DT or SDE for the Bulldogs.