The Georgia men’s and women’s teams had a solid opening day of competition in the 2017 SEC Indoor Track & Field Championships in Nashville, TN. The third-ranked Lady Bulldogs and the fourth-ranked Georgia men combined for two titles, four meet records and two school records on Friday. Through nine events scored, the Lady Bulldogs are in second place with 25 points behind Arkansas with 48.5, and the Georgia men hold the lead with 30 points but Arkansas (27), Kentucky (23) and Alabama (21) are not far behind. 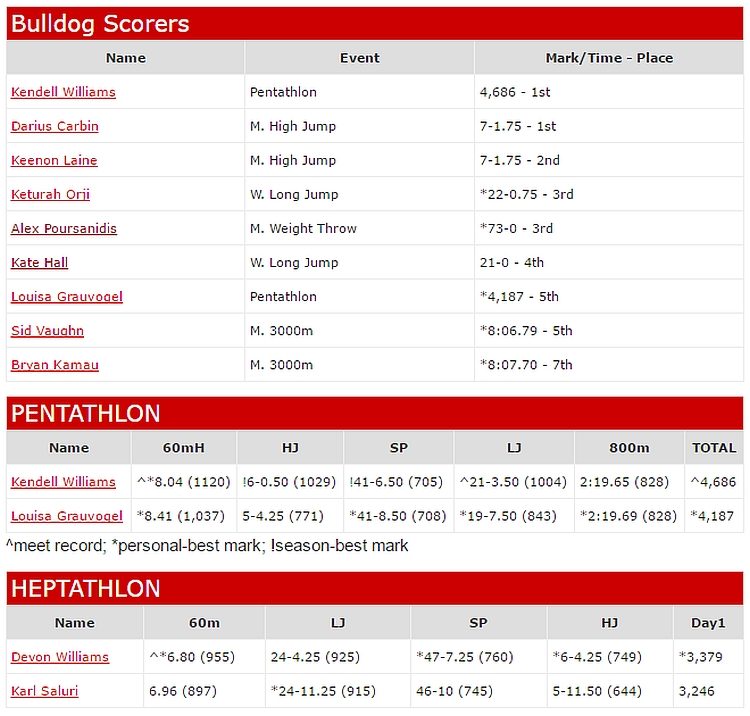 “I was pleased with our first day in this meet where we face many of the country’s best two weeks before the NCAA meet,” said Bulldog head coach Petros Kyprianou. “To win SEC titles, set meet and school records and qualify people for running event finals is no easy feat in this league. I am proud of our teams’ performances and effort so far and am hoping to finish this meet even stronger on Saturday.”


“Kendell and Keturah did what they have been doing their whole careers at Georgia, and that’s show up and compete at the big meets,” Kyprianou said. “I am pleased that Kendell went out with her record third SEC pentathlon title and I’m looking forward to see what she can do at Nationals. Keturah reached 22 feet for the first time in the long jump, breaking the school record and proving she is a true competitor in one of the hardest long jump comps that you will see. And Darius answered the bell in the high jump and brought home our first men’s high jump title in 20 years. It’s nice to have weapons in another event for the men now.”


Williams scored a facility and meet record 4,686 points, a score that ranks No. 2 in collegiate history behind her 4,703 to win the 2016 NCAA crown. Thanks in part to two other meet records mixed in her five events, she cruised to a 236-point victory as her freshman training partner Louisa Grauvogel scored the sixth-most points in school history (4,187) to finish fifth and move into position to qualify for Nationals.


With her performance, Williams now owns seven of the top-10 collegiate scores in history. She will now aim to capture her fourth consecutive NCAA title, which has never been done before in this event.


Williams rocketed out of the blocks and started with a meet record time in the 60-meter hurdles to win the event. Williams topped her own school record (8.07, 2017 Aggie Invitational) and surged to No. 8 on the national list after registering a time of 8.04 for 1,120 points.


Passing until 5 feet, 6 1/2 inches, Williams cleared six heights, including a third attempt clearance at 5-11.25. She was the only competitor to reach 6-0.50 on her second try, which was a season-best effort good for 1,029 points.


Williams lifted a season-best effort of 41-6.50 on her third throw in the shot put, making nearly a three-foot improvement to her other fair toss of the afternoon. She scored 705 points to keep a comfortable lead.


The Kell High School graduate established her second meet record of the day on her opening attempt of the long jump. Williams traveled 21-3.50, topping Arkansas’ Taliyah Brooks (21-0), and scored 1,004 points to win the event. This bested the previous meet record of 21-1.25 that had been set in 2003 and 2013.


Needing a 2:18.39 to surpass her own collegiate pentathlon record, Williams ran the 800m in 2:19.65 to finish fifth in the event. This finish scored Williams her final 828 points en route to her facility and meet record tally.


Grauvogel jumpstarted her first SEC meet by recording a personal-best time of 8.41 for fourth place and 1,037 points. This passed her 8.54 clocked earlier this year in the same facility.


Reaching a collegiate personal best of 5-4.50 during the 2017 regular season, Grauvogel hit 5-4.25 on her opening try to tie for ninth in the high jump. The Saarland, Germany, native scored 771 points in the event.


Grauvogel hit the 41-foot mark for the first time in her career during the shot put. She finished third in the event for 708 points thanks to her top throw of 41-8.50.


During the long jump, Grauvogel hovered around her top mark of 2017 until the third round. On her final try, she took off for a career-best effort of 19-7.50 to score 843 points and finished third in the event. This performance moved her into sixth place going into the final event.


Grauvogel helped pace Williams in the final event, the 800m, and completed the event with a collegiate personal-best time of 2:19.69. Grauvogel matched Williams in 800m with 828 points to lock down her fifth-place finish.


Carbin and sophomore Keenon Laine finished 1-2 in the men’s high jump to give the Bulldogs their first SEC champion of the weekend and their first on the men’s side indoors in the high jump since 1996 (Dillon Phelps).


With national high jump leader Clayton Brown of Florida failing to reach a height, Carbin hit the 7-foot mark for the fourth consecutive time this year and won his third competition of the year after clearing 7-1.75 on his second try.


Carbin, a native of San Jose, Calif., cleared 6-10.25 and 7-0.25 on his first try, as did Laine. However, Laine, an All-American transfer from Western Kentucky, reached 7-1.75 on his third try while Carbin cleared it on his second attempt. The Bulldog duo came into the weekend tied for third on the national list.


Orji and sophomore Kate Hall battled in the most highly contested long jump competitions in collegiate history. Boasting three jumpers over 22 feet on Friday, Orji passed Chanice Porter’s school record of 21-9.50 (2016 SEC Championships) with a mark of 21-11.75 on her third attempt. Orji then reached a fresh school record of 22-0.75 on her fifth attempt for third place.


Hall, who also qualified for the 60m finals, hit at least 20-5 on all five of her fair tries and finished up in fourth. The Casco, Maine, native went 21-0 in the third round to hold off the final four scorers by four inches or less. This was Hall’s first SEC meet after transferring from Iowa State.


During a season that had already seen senior Alex Poursanidis drop personal-best efforts at two meets, the Paphos, Cyprus, native let go of a career-best mark of 73 feet on his second try on Friday. This was good enough for third place as Alabama junior Daniel Haugh took control of the national lead with an effort of 75-8.


The Bulldogs scored their final six points of the day with fifth and seventh-place finishes in the 3000m. Senior Sid Vaughn trimmed seven seconds off his personal record for an 8:06.79 to take fifth and move from No. 7 to No. 5 in the school record books. Junior Bryan Kamau shaved six seconds off his previous career best and greatly improved his No. 6 place on Georgia’s all-time top-10 list with an 8:07.70.


After the first day of the heptathlon, senior Devon Williams had a day one personal record of 3,379 points thanks to three career bests in four events and is one point behind the overall leader. Junior Karl Saluri, who was the only Bulldog to earn First Team All-America honors indoors and outdoor in 2016, is in fourth with 3,246.


Devon Williams started much like his older sister, Kendell, by setting a meet record and establishing a personal best to win the first event. Williams finished in 6.80 for 995 points. The former SEC meet record was 6.87 set by Saluri at the 2016 meet.


Williams began the long jump with a pair of fouls, which forced him to post a legal attempt on his third and final try. He soared 24-4.25 on his last jump, taking off well in front of the board, to score 915 points and finish as the runner-up.


After his top mark measured a personal record of nearly 46 feet at his first heptathlon this season, Williams unloaded a shot put effort of 46-6.75 and then followed that up with a throw measuring 47-7.25 on his last attempt. This scored him 760 points for second place in the event.


Williams wrapped up his first day by notching a personal-best effort in the high jump to take third. He had a second attempt clearance at 6-4.25 to score 749 points en route to the best day one total of his career.


Saluri was second in his heat and third overall with a time of 6.96 in the 60m. He scored 897 points in the first of four events for the heptathletes on Friday.


In the long jump, Saluri improved on his second and third tries and won the competition with a monstrous personal record. Saluri reached 24-11.25 for 960 points with a tie for the second-best mark in meet history. Williams holds the meet record of 25-3.25 set last year.


Saluri had only a single fair throw in the shot put and added 745 points to his total. He opened with a mark of 46-10 and finished fifth in the shot. Saluri concluded his first day by clearing 5-11.50 (644) on his first try.


In the prelim rounds on the track, Hall raced to a career-best time of 7.28 to finish sixth in the 60m. This topped her previous personal record of 7.30 run at Iowa State last year (her UGA personal record was 7.35) moved her into the nation’s top 16. Hall’s finish also improves her No. 2 mark on the UGA all-time list and brings her within .04 of the 18-year-old school record.


Kendal Williams cruised to a victory in the fourth heat of the men’s 60m prelims and took third overall with a 6.61. He came into the meet in a tie for the nation’s fastest time with Tennessee’s Christian Coleman.


Also of note, junior Morgan Ainslie ran a career-best time of 4:53.79 to finish 15th in the mile prelims. Freshman Micaiah Ransby finished her 400m prelims with the fastest time of her career (54.95) to take 21st. Ransby also matched her collegiate personal best of 24.24 to take 24th in the prelims.


Devon Williams and Saluri will begin the second day of the heptathlon on Saturday at 11 a.m. ET. They will complete the 60m hurdles, pole vault and 1000m.


The women’s high jump, featuring senior Tatiana Gusin, junior Mady Fagan and sophomore Mary Terry, starts the open events at 12 p.m. on the meet’s second day. The first event on the track is the women’s 60m hurdle finals at 3 p.m.


To check on Georgia’s progress at the SEC Championships over the weekend, please visit the live results page at http://live.pttiming.com/?mid=1151.


CLICK HERE for the results from day one of the 2017 SEC Indoor Track & Field Championships.


For day one results of the heptathlon, CLICK HERE.